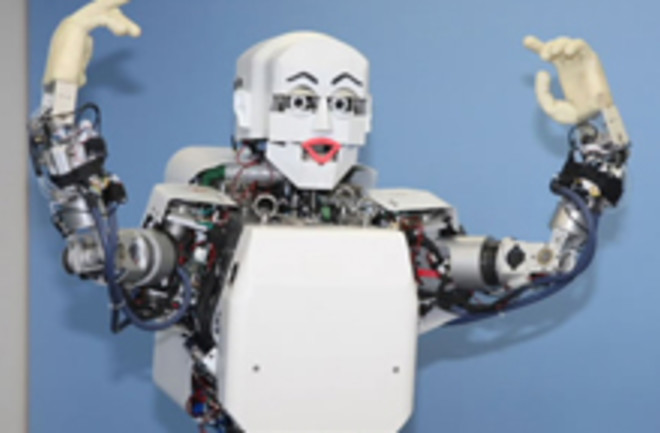 These days, add an emotion, a personality type, or a body part to a robot and it will make the news. In March, Japanese researchers created a female humanoid that can display facial expressions. Last year, British scientists created a robot that can move and think like humans, while European researchers have created a robot that can become "emotionally attached" to you. Now, Japanese researchers have created a humanoid robot that, they claim, is the first in the world to display multiple emotions, with its entire face and body showing what it's feeling. CBS13 reports:

It is able to express...happiness, fear, surprise, sadness, anger, and disgust, by opening and closing its eyes, moving its lips and eyebrows, and using its arms and legs. The robot is installed with 48 "actuators" which allow its face and body to move in a variety of ways. It shows happiness by opening its eyes and mouth wide and raising its arms, and sorrow by drooping its head and covering its eyes.

Whether it displays these emotions at appropriate times remains to be seen. Related Content: Discoblog: Japan’s "Child Robot" Learns to Walk DISCOVER: 20 Things You Didn’t Know About Robots DISCOVER: When Robots Live Among Us