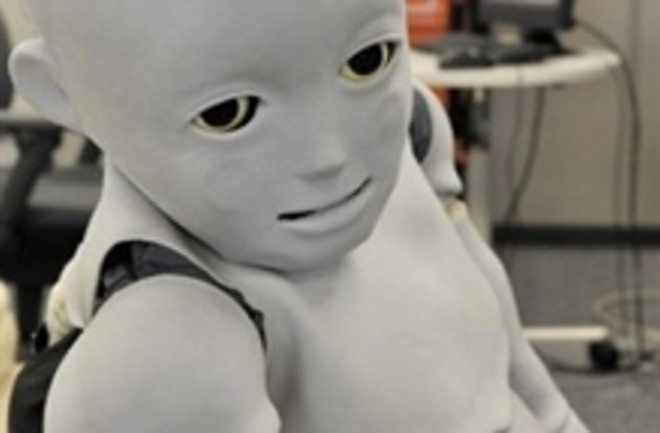 The CB2 baby robot has begun to grow up, and can now learn like a toddler. The two-year-old, four-foot-tall, 73-pound robot is now interacting with humans and "developing social skills," just as its creators at Osaka University hoped it would. Engineering professor Minoru Asada was interested in child development, so in 2007 he created a robot with a Biomimetic Body—a flexible and true-to-life machine built to act and learn like a child—so it can respond to humans in a way similar to how a baby reacts to its mother. To make CB2 as human as possible, researchers built it with sensors and cameras to help it perceive the world, and gave it enough smarts to recognize emotion in others. Already, the robot has learned to walk, taking small strides as air pressure powers its 51 “muscles” into motion. CB2 can capture people’s expressions through the cameras inside its eyeballs, and log the visual cues of emotions into permanent memory in its computer-based brain. And yes, the robot can feel the stroke of a person’s hand—its skin is made of soft silicon and has 197 pressure sensors spaced throughout its body, giving CB2 enough sensitivity to identify human touch. And, lastly, the CB2 will soon begin to speak through artificial vocal cords (we don’t know what its first words will be, though). Related Content: 80beats: Robot Scientist Discoblog: Sweating Robot