20 Things You Didn't Know About... Robots

Modern robots can respond to emotion and the smell of fine wines. 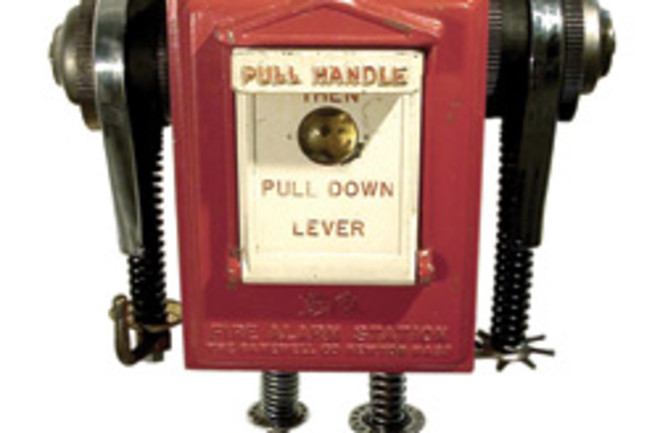 1 “Robot” comes from the Czech word robota, meaning“drudgery,” and first appeared in the 1921 play R.U.R. (Rossum’s Universal Robots). The drama ends badly when the machines rise up and kill their creators, leaving a sole lonely survivor.

2  They say it was an accident. The first known case of robot homicide occurred in 1981, when a robotic arm crushed a Japanese Kawasaki factory worker.

3 More than a million industrial robots are now in use, nearly half of them in Japan.

4 Archytas of Tarentum, a pal of Plato’s, built a mechanical bird driven by a jet of steam or compressed air—arguably history’s first robot—in the fifth century B.C.

5  Leonardo da Vinci drew up plans for an armored humanoid machine in 1495. Engineer Mark Rosheim has created a functionalminiature version for NASA to help colonize Mars.

6 Slow but steady: The real Mars robots, Spirit andOpportunity, have logged 10.5 miles trudging across the Red Planet formore than three years. The unstoppable droids were built to last 90days.

7 The United States’ military corps of 4,000 robots includes reconnaissance Talon bots that scout for roadside bombs in Iraq and PackBots that poked around for Osama bin Laden’s hideout in Afghanistan. Apparently without much success.

9 Low tech vs. high tech: Taliban fighters in Afghanistan have reportedly used ladders to flip over and disable the U.S. military robots sent to scout out their caves.

11 Life is tough in Tinseltown: Elektro later appeared in the 1960 B movie Sex Kittens Go to College.

12 R2-D2 is the only character that appears unchanged (by aging, say, or a funky black outfit) in all six Star Wars movies.

13 R2’s dark secret: It was played by actor Kenny Baker, who by the end was mostly given the boot and replaced by CGI.

14 Chris Melhuish of the Bristol Robotics Laboratory created robots that use bacteria-filled fuel cells to produce electricity from rotten apples and dead flies. The goal: robots that forage for their own food.

15 Mini Me: Australian researchers are trying to build a microrobot that would mimic the swim stroke used by E. coli bacteria.It would be injected into a patient so it could take a biopsy from the inside.

16 Cybernetics professor Kevin Warwick calls himself the world’s first cyborg, with computer chips implanted in his left arm. He can remotely operate doors, an artificial hand, and an electronic wheelchair.

17 Winebot, built by Japan’s NEC System Technologies and Mie University, can ID scads of different wines, cheeses, and hors d’oeuvres . . . up to a point. It recently mistook a reporter’s hand for prosciutto.

18 MIT’s Media Lab is trying to make robots personal,developing RoCo—a computer with a monitor for a head and neck—and Leonardo, a sort of super-Furby designed to respond to emotional cues.

19 No strings attached! Robotics expert Henrik Christensen predicts humans will be having sex with robots within four years.

20 Hans Moravec, founder of Carnegie Mellon’s RoboticsInstitute, predicts that robots will emerge as their own species by2040. “They could replace us in every essential task and, in principle,operate our society increasingly well without us,” he concludes, oddly cheery.