Green Tech Co. Says It Has a Secret: A Fuel-Producing Wonder Organism 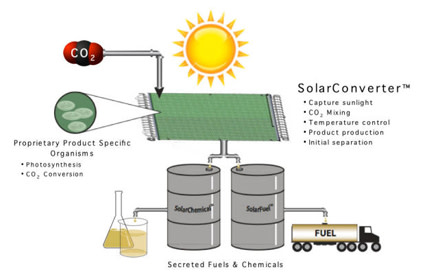 A startup biotechnology company unveiled its grand plans for a new energy source yesterday--although it didn't share a few crucial details. The company, Joule Biotechnologies, says it has genetically engineered an organism that can efficiently produce unprecedented amounts of liquid fuel. However, chief executive Bill Sims will not reveal what that marvelous organism is.

"If I tell you what the organism is, I’m inviting everyone else to take part in a transformational, evolutionary, game-changing technology" [Boston Globe]

, he says. The company's announcement comes soon after both ExxonMobil and Dow Chemical announced their investments in algae-derived biofuel production, and Joule's technology has some similarities with those two projects. Like both those algae projects, Joule says it won't be harvesting a plant and squeezing the oil out of it; instead the organism will secrete the fuel. But Sims says his organisms aren't algae.

In addition, Sims said the organisms do not need fresh water but can be grown in both brackish water or graywater, which is nonindustrial waste water from sources like baths and washing machines [Reuters].

Using a process that the company dubs "helioculture," sunlight and carbon dioxide interact with the photosynthetic organisms, Sims says; as an added bonus, the carbon dioxide used could be the emissions from a factory or power plant. Sims says the organisms secrete the chemical equivalent of ethanol.

"A large project would look much like a solar array," Sims explained. "Instead of converting the sun's heat energy into electrons, we're using it to create liquid fuels" [Greenwire].

The company claims it can generate 20,000 gallons of fuel per year from every acre of "solar converter" panels, which is far more than other companies expect to produce. Exxon's algae project, for example, aims to generate about 2,000 gallons per acre. The company's bullish projections have garnered plenty of attention, but also ample skepticism.

Joule hopes to build a pilot plant next year, and a commercial-scale plant by 2012. That’s the same kind of ambitious timeline that has marked an awful lot of next-generation biofuel projects in recent years—projects that almost uniformly have failed to live up their hype. In contrast, Exxon—which has a few more years experience in the fuels business—figures it will take them “five to ten years” to get even small-scale plants up and running [The Wall Street Journal, blog].

HealthGene Therapies Make It to Clinical Trials
Recommendations From Our Store