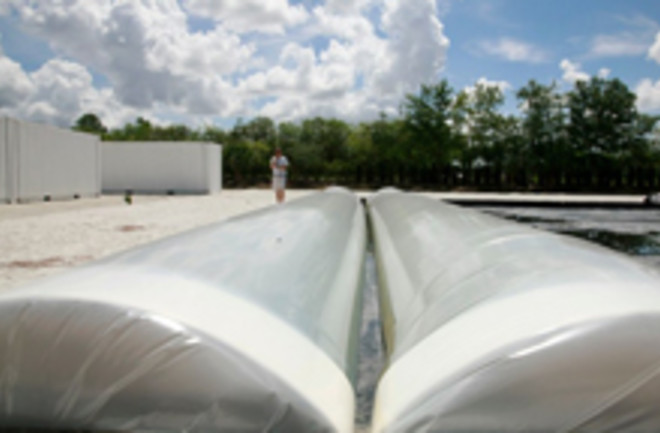 At a Texas industrial site, the vats of chemicals may soon stand adjacent to long tubes filled with algae. Industrial giant Dow Chemical today announced a new partnership with startup company Algenol Biofuels to build a pilot plant, which will use algae to convert carbon dioxide emissions into ethanol. That ethanol could be used either as a biofuel or, eventually, as an ingredient for Dow's plastics. Pond scum is one of the hottest trends in green technology, and a few dozen companies are racing to bring algae-based biofuels to the market. But one prominent algae company, GreenFuel, went out of business just a few months ago, leading some commentators to believe

that we are a longer way off from commercialization than claimed by breathless algae start-up press releases [Greentech Media].

If Dow and Algenol can bring their plans to fruition, it will be the most compelling argument yet that the renewable energy source does have the potential that its supporters say. Algenol's chief executive, Paul Woods, explains that the Texas demonstration project will feature algae growing in 3,100

“bioreactors,” troughs covered with flexible plastic and filled with saltwater. The water is saturated with carbon dioxide, to encourage growth of the algae. “It looks like a long hot dog balloon,” Mr. Woods said. Dow, a maker of specialty plastics, will provide the “balloon” material. The algae, through photosynthesis, convert the carbon dioxide and water into ethanol [a fuel source], oxygen and fresh water [The New York Times].

uses a slightly different approach to algae fuel than its competitors. While most algae-to-fuel startups ... grow algae so they can process the algae directly into fuel, Algenol collects ethanol vapors from the algae, which involves neither killing the plants nor the use of an expensive refining process [Earth2Tech].

Algenol's executives think this process may be the key to their success, as other algae companies have foundered on difficulties with harvesting the algae and extracting the oil. Dow and Algenol have asked the Energy Department for $25 million under the stimulus bill, but say they're committed to building the pilot plant regardless of federal support. Related Content: 80beats: Forget Biofuel. Is Bioelectricity the Next Big Thing? 80beats: Algae-Filled Greenhouses Aim to Take in CO2 and Turn out Biofuel 80beats: Super-Green, Algae-Derived Jet Fuel Passes Tests With Flying Colors DISCOVER: The Second Coming of Biofuels DISCOVER: Life After Oil dives into the ethanol debate Image: Algenol