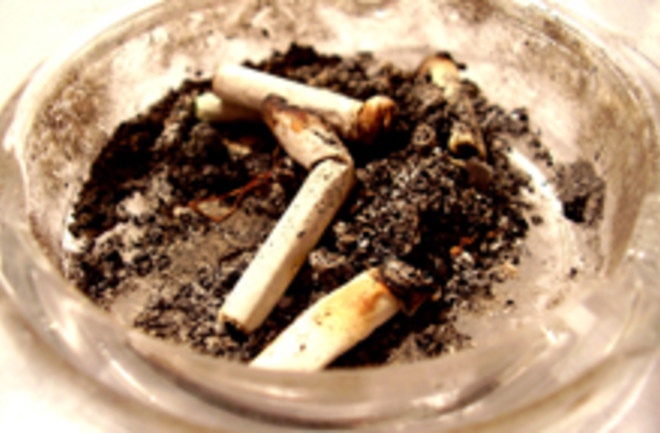 Cigarettes aren't done causing damage when you put them out. Whether the tally of discarded butts worldwide is 4.5 trillion or 5.6 trillion, it represents an enormous amount of nicotine and heavy metals deposited in the environment. But what if the contents of your ashtray had a useful application? According to Chinese researchers, they might. Seeking a use for all that junk, the scientists tested the chemicals in cigarette butts for their effects on a kind of steel used in oil and gas pipelines.

The results were pretty dramatic. In a near-boiling solution of 10 and 15 percent hydrochloric acid (HCl; same stuff as stomach acid), the cigarette-derived cocktail reduce corrosion by between 90 and 94 percent [Discovery News].

The researchers document their technique in the study

in Industrial & Engineering Chemistry Research. First, they had to soak cigarette butts they found on the side of the road in distilled water, with five butts to 100 milliliters (about 3.4 ounces) of water. That extract was then added to the HCL solution. If just five percent of the resulting solution consisted of that cigarette extract, those dramatic corrosion reductions began to appear.

If the researchers upped the strength of the acid, they needed to also increase the amount of added cigarette extract. For instance, with a 20 percent hydrochloric acid solution, the researchers needed to increase the butt leachate to 10 percent of the liquid to keep damage to the steel low: at less than 12 percent of the corrosion seen with the unamended acid solution [Science News].

Nine of the cigarette chemicals appeared to offer protective services for steel; interestingly, nicotine was the most important of the nine. Don't keep smoking

for steel's sake: The trillions of butts across the world represent more than enough for this use. But if you want to put your butts to good use, you can actually recycle

80beats: In a Bad Economy, Recyclables Are Just Pieces of Junk

DISCOVER: Smoke Gets in Your Hair