In a Bad Economy, Recyclables Are Just Pieces of Junk 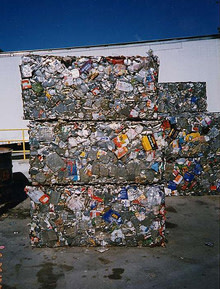 Even the recycling business is taking a hard hit from the current economic crisis. What in recent years has been a booming market bolstered by a new environmental awakening, has seen a complete reversal of fortunes in recent months as the demand for recycled materials plummeted with a drop in manufacturing.

“Before, you could be green by being greedy,” said Jim Wilcox, a professor at the Haas School of Business at the University of California, Berkeley. “Now you’ve really got to rely more on your notions of civic participation” [New York Times].

Plastic bottles have fallen from 25 cents to 2 cents a pound. Aluminum cans dropped nearly half to about 40 cents a pound, and scrap metal tumbled from $525 a gross ton to about $100 [AP]. Only glass prices are holding because demand is still high. The market for recycled materials is tied closely to new manufacturing, much of which takes place in Asian countries; the recyclables are shipped overseas and new products are shipped back to the U.S.

Ordinarily the material would be turned into products like car parts, book covers and boxes for electronics. But with the slump in the scrap market, a trickle is starting to head for landfills instead of a second life [New York Times].

Those in the recycling business say price fluctuations are common but the latest downturn has been the worst they've ever seen.

"I've seen those prices bounce around before," said Doug Lien, planner with the Tri-County Solid Waste Commission. "I don't think it will last forever, but it certainly puts a squeeze on things in the short term" [St. Cloud Times]. Some businesses, like grocery stores, retailers, and contractors hired by cities, that used to make a profit from delivering materials to recycling centers now have to pay a fee to unload their scraps. Many big recyclers are stockpiling their recyclables in hopes of a market recovery, but if space runs out the only option may be the Dumpster.

Will recycling survive the economic crisis? Environmentally conscious consumers have been able to pat themselves on the back and feel good about sorting their recycling and putting it on the curb. But most recycling programs have been driven as much by raw economics as by activism [New York Times]. Many buyers of recyclables are trying to renege on long-term contracts signed back when prices were at their peak. The record low prices have driven even some junk poachers—people who steal recyclables from contractors—to abandon their trade. “I knew it was really bad a few weeks ago when our guys showed up and the corrugated cardboard was still there,” said [Michael Sangiacomo] of Norcal Waste Systems

. “People started calling, saying ‘You didn’t pick up our cardboard,’ and I said, ‘We haven’t picked up your cardboard for years’ ” [New York Times].

Related Content: DISCOVER: 20 Thing You Didn't Know About... Recycling DISCOVER: A New Source of Green Energy: Burning Tires? Discoblog: Newspaper May Be Dying, But Their Corpses Could Reduce Toxic Waste