Why Are We Afraid of Bugs?

Being afraid of bugs isn't irrational. But learning about their importance to our ecosystem could help you see them in a new light, and even reduce your fears. 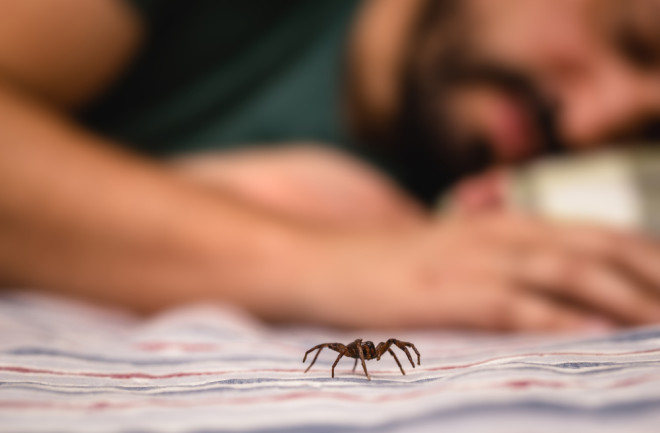 Insects and arachnids are among the top things that people fear most. They’re creepy, crawly and some can even be dangerous, from having poisonous venom to carrying deadly diseases — like the tsetse fly, which can carry the parasites that cause East African trypanosomiasis, or sleeping sickness, a fatal illness if left untreated.

For the most part, though, insects and arachnids are harmless. So why are we so afraid of them? Spiders and insects may take the cake when it comes to the critters that creep us out the most, but they can still bring lots of benefits to both the ecosystem and our daily lives.

Seeing a spider scuttle across the floor or hearing the buzz of a wasp in your ear is enough to make anyone jumpy. But the fact that these tiny creatures can usually be stopped by a well-placed shoe or rolled-up newspaper is enough to quell most fears. However, despite their small stature, some spiders and insects pose a serious threat to humans.

Black widow and brown recluse spiders, for example, are among the world’s most venomous spiders. Just one bite can land victims in the hospital, whether from the black widow's (sometimes) spasm-inducing neurotoxins or the brown recluse's poisonous venom, which can cause skin tissue to die. Meanwhile, the aggressive fire ant not only leaves a nasty bite, but will chase after anything that disturbs their nest. And parasitic insects like ticks carry harmful diseases, while bugs like bees and wasps have a potent sting — which can cause allergic reactions in roughly 5 to 8 percent of people.

Our fear of spiders and bugs may actually stem from an anxious evolutionary trait, according to a study in the Journal of Experimental Psychology. Participants in the study viewed images containing potential threats like snakes and spiders, and others showing flowers and plants. During the review, the participants were able to locate the snakes and spiders faster than the flowers. This suggests that, evolutionarily speaking, we’ve developed to be cautious of any potential threats, no matter how small.

Still, according to Gus Brunette, a research technician in the entomology department at the University of Wisconsin-Madison, “a vast majority of bugs and spiders should not be feared.”

Some scientists suggest that our fear of bugs is more of a disgust response than anything else. Humans developed this response to avoid a variety of dangers, such as poisons, rotting food and unsafe living environments. While not all bugs and spiders are dangerous, when we see them on our food or in our homes, we still feel an intuitive sense of revulsion. Sometimes, this is a result of the fact that bugs such as flies and cockroaches often feast on rotting food, dead animals and feces. So when we see them in our homes or on our dinner plates, that disgust response gets triggered in the brain.

Another potential trigger focuses on infestation. Bugs like lice, fleas and bed bugs can infest a home, making residents and pets alike miserable. Termites, which infest homes to feast on wood, are another example, causing billions of dollars worth of damage per year in the U.S.

Looking past the fear and disgust, however, Brunette says our disdain for spiders and insects may be more of a learned trait. What's more, bugs aren't as bad as we tend to think.

Why Bugs Are Important

Rather than being something we're innately born with, Brunette says our fear of spiders and bugs could be passed down to us from our parents and our peers; just look at the way spiders and insects are typically portrayed in books and films. While films like A Bug’s Life and Bee Movie cast bugs in a positive light, spiders and insects tend to find themselves as the central villain in many films, especially in the horror genre.

In reality, while some bugs are dangerous and a nuisance to get rid of, spiders and insects are vital to our ecosystem and environment. "Bugs do everything for our ecosystem," Brunette says. "They break down waste and supply the food chain."

Examples of bugs benefiting their environment are plentiful. Predator bugs such as spiders, ladybugs and dragonflies keep pesky bugs like flies, mosquitos and aphids at bay. Ground worms help to till and add nutrients to the soil to help grow food. Bees, one of the most misunderstood insects, are responsible for pollinating crops and trees that supply food and oxygen. When you consider the fact that honeybees are still dying off in large numbers, it's even more tragic that they're often mistaken for wasps and exterminated.

"Having people learn more about bugs can help teach people not to be intimidated by them," Brunette says. "Learning about them can make people appreciate bugs more."

Learn more about bugs in the collection below: