Scientists know some species are dying out, but what we don’t know is even scarier. 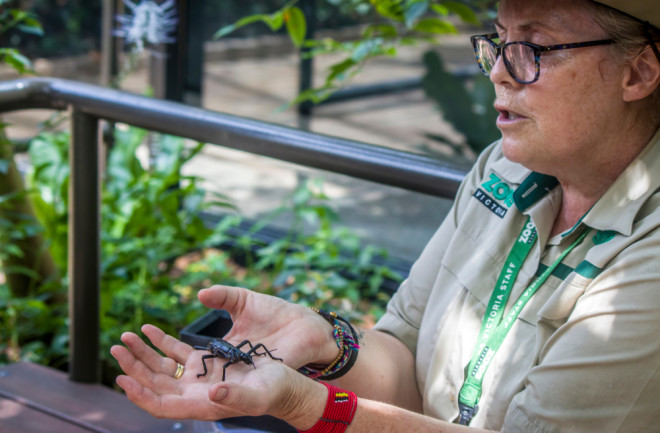 When a fourth grader named Rex wrote to the American Museum of Natural History to ask what was the most endangered animal on Earth, he probably didn’t expect one of the answers to be the Lord Howe Island Stick Insect. But it’s true that most endangered animals are insects. Insects make up about 40 percent of all animals on the planet. That’s closer to 97 percent if you count all invertebrates (animals without a backbone, which  includes worms, spiders, mussels, snails, clams and more). So when we say “animals,” and think only about mammals and birds, we’re missing most of the picture. And that’s a bigger problem than you might think.

The crash of an insect population, due mostly to the usual suspects — habitat loss, chemical pollution, light pollution, climate change — affects everything else up the food chain and damages entire ecosystems in ways we don’t fully understand. And it’s what we don’t know that makes the problem of insect extinctions so fiendishly difficult.

When it comes to endangered mammals, we know exactly what we’re losing. From rhinos to tigers to gorillas, we know where these animals live, what they eat and how they make their way in the world. In some cases we know, almost down to the individual, how many are left. In short, we know what they need and what we need to do to save them (even if that’s not so easy to do).

With insects we know almost nothing. Scientists have described a little over 1 million species of insects, but estimate that there are between 10 and 30 million species out there. Most of the insects we’re losing, we’ve never even met. Even within a given species that we do know, we don’t know how many individuals there are — nor how many there should be.

“Not having this basic ecological information has led people to base everything on the fruit fly or the butterfly. But those are really specialized insects, so they’re not representative of what the average dragonfly or silverfish might be up to,” explains Jessica Ware, entomologist and curator at the American Museum of Natural History. There is a dire need for more research on insects, she says. It’s hard to learn what steps to take to save insects when we know so little about them. We also need more public education about the risks to insects and the ecosystems they’re a part of. And that means focusing not just on honeybees and monarch butterflies.

“It's relatively easy for folks to rally behind species with a cute appearance, a charismatic name or a compelling story,” says Patrick "PJ" Liesch, entomologist and director of the Insect Diagnostic Lab at the University of Wisconsin Madison. “However, for every cute or charismatic species in existence, there are many more species threatened with extinction that don't get their moment in the spotlight. We should be concerned about all of those species as well — not just the ones catching the most headlines.”

So here are just a few of the insects we know are in trouble — some of them more charismatic than others, but all worth getting to know.

Researchers call this critically endangered water bug a “toe-biter,” for the reasons you might expect. It’s a predatory insect with a nasty bite. People who aren’t entomologists tend to call all insects “bugs,” but most aren’t. The Belostoman Bug, however, is a true bug.

It lives in hot springs in California’s Death Valley National Park, a popular tourist site. Swimmers have destroyed much of the spring’s vegetation, which is the Belostoman’s habitat. Artificial light is also a problem for these water bugs. In breeding season, when they make flights to look for mates, they can become disoriented by street lights and not make it back to their watery homes.

This beautiful dragonfly with emerald green eyes and a metallic green body was once found from Alabama to Wisconsin. Today, it hangs on by a gossamer wing in only four states: Illinois, Michigan, Missouri and Wisconsin. It’s not a little guy, either. This dragonfly is about 2.5-inches long with a 3-inch wingspan. It lives in spring-fed marshes and sedge meadows and depends on endangered wetlands for its own precarious existence. In addition to the draining of wetlands for development, the use of pesticides and other pollutants have spoiled the dragonfly’s habitat.

The U. S. Fish and Wildlife Service has developed a recovery plan that includes protection of wetlands, research to better understand the needs of the animal and public education programs. But for now, the situation is dire.

The peacock tarantula is not an insect, but an arachnid (as are scorpions, ticks and mites). The few remaining members of this critically endangered species live in a small patch of forest in Southern India. What little habitat this tree-living species has left is threatened by logging.

Some might say there’s nothing charismatic about a fuzzy spider with a nasty bite. But tarantula enthusiasts disagree. Because of its lovely coloration, this rare spider is popular in the tarantula pet trade. This may contribute to its scarcity. On the other hand, because it breeds easily in captivity, there may be hope for one day re-establishing the species in the wild.

And that stick insect Rex learned about? The almost 6-inch long insect, also known as the tree lobster, was once common on Lord Howe Island, a small volcanic land mass in the Tasman Sea between Australia and New Zealand. In 1918, a supply ship wrecked on the island, letting loose a swarm of black rats. With no natural predators on the island, the rats quickly established a colony. By 1920, the rats had done away with the last of the tree lobsters. Or so everyone thought.

In the mid-20th century, rock climbers found what looked like dead stick insects at the peak of Ball’s Pyramid, a spot on the island reachable only by skilled climbers and, evidently, some resilient tree lobsters. Researchers eventually followed-up and in 2003 found two breeding pairs. The quartet was shipped to the Melbourne Zoo to establish a captive breeding program in the hopes of re-establishing the species. The Lord Howe Island Stick Insect is still critically endangered, but at least now there’s a little bit of hope.