How tiny fungus farmers made a model of sustainable agriculture. 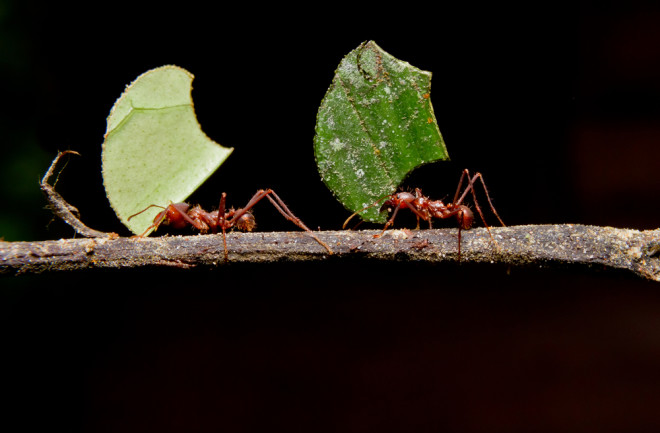 “I know of no pursuit in which more zeal & important service can be rendered to any country than by improving its agriculture,” opined George Washington in a 1794 letter. While the prevalence of the frontier farmer has admittedly decreased since Washington’s day, agriculture itself is arguably one of humanity’s crowning achievements, laying the groundwork for the rise of civilization and allowing the human population to exponentially proliferate.

However, agriculture isn’t necessarily a uniquely human endeavor. Leaf cutter ants, each with a brain no larger than a pinhead, have also transitioned from hunter-gatherers to farmers — and they did it long before humans ever existed.

To the extent that ants are farmers, it's because they, along with a select few other species, cultivate their own food for consumption. Currently, over 200 ant species across the Western Hemisphere make forays into the jungle, driven by some deep-seated atavistic instinct that compels them to harvest plant matter, which is carried back to the nest to feed fungal crops, which are consumed in turn by the ants.

According to a 2017 study by the Smithsonian Institution, ants have been farming various fungi in the South American rainforest for some 60 million years. Using the genomic data of different ant species, the study found that a divergence occurred within the agricultural ant lineages some 30 million years ago, a result of some ant species moving to drier climates.

Farming ants practice two types of cultivation: higher and lower agriculture. In lower agriculture – which typically occurs in humid rainforests – fungal crops are capable of escaping the ant colonies and returning to the wild. The ants sometimes gather the wild fungi to bring back to their nests. This allows the gene pools of wild and farmed fungi to mix, and as a result, the lower ants have less of an influence over the genetics and evolution of their crops. Essentially, the fungus can survive without them, and this means it is less dependent on the ants.

In higher agriculture, neither the ants nor the fungus is capable of surviving independently. According to a Smithsonian press release about the study, around 30 million years ago, as the climate in South America shifted toward cooler, dry grasslands, some ants colonized the new landscape outside of the forest. The fungus, which developed in the rainforest, could no longer escape and survive in the desert, effectively isolating it into a different species dependent on the ants, unable to exist on its own in the wild. The ants dig chambers up to 12 feet underground, and alter moisture and air flow to create the ideal greenhouse for their crops.

“If you’ve been carried into a dry habitat, your fate is going to match the fate of the colony you’re in. At that point, you’re bound in a relationship with those ants that you were not bound in when you were in a wet forest,” said entomologist and lead author Ted Schultz in the press release.

Over time, the fungus, which could not survive in dry climates without the ant’s constructed fungus greenhouse, became domesticated. “As with certain crops that have been so heavily modified by human breeders that they can no longer reproduce and live on their own in the wild, some fungal species have become so completely dependent on their relationship with farming ants that they are never found living independent of their farmers,” Schultz said in the release.

The Feeling is Mutual

However, the inexorable interplay between insect and fungus is more layered. When ants became farmers, they lost the ability to make an amino acid, arginine. So they had to depend on the fungus for that amino acid. In exchange, the ants water, clean, and nurture the fungus. This raises the question, which is the true puppet master? Have the ants controlled the fungus to their benefit, or are they the ones being controlled, toiling away out of necessity for amino acids -- upholding the prosperity of their fungal masters? The answer is neither. What they have developed is a mutualistic relationship, where both species benefit from a harmonious synchronization.

The ant farmers build sophisticated, climate-controlled underground labyrinths, and formulate fungus food with selective nutrients, which allow them to increase the fungus production without sacrificing the crop’s resilience to environmental threats. They secrete antibiotics to prevent fungus-threatening pathogen growth, and they evolve with the local ecosystem to achieve similar checks and balances. Their agriculture provides all the food needed for their societies at a scale and efficiency that rivals human agriculture. Through all these, they secure a stable food supply without inflicting ecological carnage.

Juxtapose this to some modern farming practices, where agriculture has involved leveled forests, steel tractors, and chemical pesticides at the expense of biodiversity and environmental health. While we can’t directly copy the ant farming blueprints, we can learn to better coexist with other species and engage in more sustainable agricultural practices. Ultimately, we want to be able to sustain the burgeoning human population of this planet without leaving a trail of polluted ecosystems and deforested wastelands in our wake.