The Permian Extinction: Life on Earth Nearly Disappeared During the ‘Great Dying’

During a wave of global warming reminiscent of our modern crisis, plants and animals came alarmingly close to annihilation. 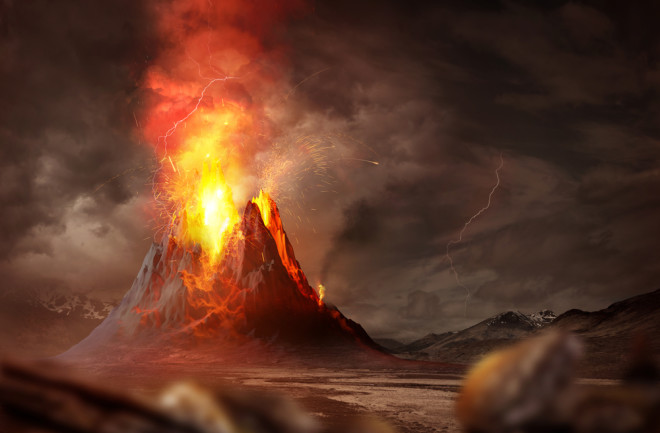 From the moment life arose on our planet, death trailed close behind. During the Permian mass extinction 250 million years ago, it almost caught up. They don’t call it the “Great Dying” for nothing —  95 percent of marine species and three-quarters of land species perished, as the largest volcanic eruptions in history fueled a devastating period of climate change that many researchers compare to global warming today.

The extinction that wiped out the dinosaurs draws more attention, but it’s no match for the Permian, the third major mass extinction of the Big Five. This cataclysm was by far the most desperate time for life on Earth. And, in contrast to many extinctions, most scientists agree on its main cause: “Volcanism has pretty clearly emerged as the robust answer,” says Paul Renne, a geophysicist at the University of California, Berkeley.

Evidence for this theory comes from the Siberian Traps in Russia, a vast field of lava flows left over from intense volcanic activity near the end of the Permian period. Altogether, the layers of magma cover more than half a million cubic miles — or enough to bury the entire world to a depth of around 20 feet. They aren’t the product of some ancient Mount St. Helens or Krakatoa, though. “These eruptions are very, very different,” Renne says. “They’re a lot more like Hawaii. They’re really just flows that creep over large areas.”

In the 1990s, Renne and his colleagues were the first to date the Siberian Traps, matching them almost perfectly to the fossil record for the extinction. Since then, more analysis has refined that chronology, bolstering the link between the most voluminous volcanism since complex life first emerged and the most profound die-off of all time.

Those eruptions would have released an enormous amount of carbon dioxide, and it’s possible that subterranean magma, as it ignited coal seams, added even more. “What you see at the surface is only part of it,” Renne says. But the simple fact of global warming, he notes, “doesn’t really tell you anything about the kill mechanisms.” What actually laid waste to the biosphere?

The culprit is likely a combination of climate changes. Such extreme volcanism would certainly result in higher temperatures, as greenhouse gases saturate the atmosphere. But it could also cause cold snaps, as particulate matter blocks the sun. The closest modern analogue to the Siberian Traps is the 1783 Laki eruption in Iceland, which lowered the average temperature in the Northern Hemisphere by 1.8 degrees Fahrenheit. Its lava output was only 3 cubic miles.

Long term, though, temperatures clearly rose. And Permian Earth was a warm place to begin with — “you more or less go from a greenhouse planet to a hothouse planet,” says Cindy Looy, a paleobotanist at the University of California, Berkeley.

Some of her recent research indicates a breach in the ozone layer left plants vulnerable to ultraviolet radiation. The rays likely didn’t harm the plants themselves, but Looy has found their malformed pollen and spores. These deformities would have hampered reproduction and reduced populations gradually. “If you just wait a while, you get an extinction,” Looy says, “but if you were standing in that landscape yourself while the extinction was happening, you might not see anything.”

Fossilized charcoal from the time suggests widespread fires helped level the forests, and scientists have detected a worldwide spike in fungi that likely fed on the decaying wood. Acid rain may also have played a part in deforestation. Whatever happened, less vegetation means less carbon sequestration, which in turn means even higher CO2 levels.

The mode of death differed in sea dwellers but came from the same root cause: an influx of carbon dioxide that heated and acidified the oceans. Warmer water holds less oxygen, meaning many animals may have suffocated. One study estimates the near-surface water temperatures rose a catastrophic 50 degrees Fahrenheit, while oxygen levels fell 80 percent. Meanwhile, acidic water made it impossible for many seafaring organisms to produce the calcium carbonate skeletons and shells they needed to survive.

A fossil of a trilobite, one of Earth's earliest arthropods, is seen on display at the Shanghai Natural History Museum. Trilobites ruled the world during the Ordovician. (Credit: AKKHARAT JARUSILAWONG/Shutterstock)

Trilobites, after outlasting two mass extinctions, finally succumbed to these new threats. So did many reef-forming corals, which supported countless other marine species. But for the first time, an extinction made itself felt on land as well. The Permian extinction was the first to strike after plants and animals colonized dry ground.

By then, true forests grew around the world, offering many of the ecological niches we see in terrestrial environments today. The various roles that mammals fill now were then under the purview of the synapsids, often described as mammal-like reptiles that ruled the world for tens of millions of years.

One of the most stunning was dimetrodon, a 10-foot carnivore that looked like a Komodo dragon with an arched sail on its back. The fanged gorgonopsians were the saber-toothed tigers of their age. Then there were the dicynodonts, a diverse and common group of tusked herbivores with turtlelike beaks. “They range in size from mouse up to elephant,” says Christian Kammerer, a paleontologist and curator at the North Carolina Museum of Natural Sciences in Raleigh. Some of the larger ones may have grazed the prehistoric landscape in herds.

By the end of the extinction, just one genus of these apex creatures survived, but surprisingly, it flourished. Lystrosaurus — a “disaster taxon,” or an organism that thrives in conditions that are lethal for most species — is “the poster child of the end-Permian extinction,” says Pia Viglietti, a paleontologist with the Field Museum of Natural History in Chicago.

How did they survive? For one, they were burrowers. Looking to their modern counterparts, Kammerer notes that prairie dogs and mole rats are adapted to low oxygen levels. This might have helped lystrosaurus endure an atmosphere that was becoming unbreathable for other animals. It also could have offered them an escape from the scorching midday sun and its ultraviolet rays. According to one recent study, they may have even been able to enter a hibernation-like state called torpor.

Even with lystrosaurus to repopulate the planet, though, the synapsids “never regain their ecological diversity,” Kammerer says. To be fair, they are the ancestors of all living mammals. But they faded into the background of the Triassic period as new waves of outlandish creatures vied for dominance.

“I think most paleontologists would agree that the weirdest [land vertebrates] are in the Triassic,” Kammerer says. “It’s a time of incredible experimentation.” You might equally call it a time of trial and error — many of its products didn’t last long.

One dead end was atopodentatus, a marine animal “that has sort of a vacuum cleaner for a face,” he says. Another was vancleavea, which seemed unsure whether it was a snake, a lizard or an eel. Drepanosaurus, a “monkey-lizard-esque thing” had a claw at the tip of its tail, presumably for hanging from tree limbs. “This flowering of diversity was really only possible because the extinction shook the cage,” Kammerer says. “It broke the incumbency of the synapsids,” leading to an ecological free-for-all.

Out of that melee came the dinosaurs. In fact, Viglietti says, by dethroning the synapsids, “this extinction event basically allowed the rise of dinosaurs.” Eventually, of course, they met the same fate. And then mammals — the only living descendants of the synapsids — rose to power, culminating 65 million years later in the one species that may single-handedly force history to repeat itself: humans.

Some experts believe we’re on track to recreate the Permian extinction, but it’s difficult to say how similar the circumstances are. For example, it’s unclear what quantity of greenhouse gas triggered the disaster 250 million years ago. “It would be useful to know how much gas our atmosphere can handle,” Renne says, “for our own selfish purposes.”

If the present warming does mirror the past, one point is especially grim: Once death descended in the Permian, Viglietti says, “the effects were quite long.” Gaps in the records for coal and coral suggest land and water ecosystems took millions of years to fully recover. “I think the most important message from the end-Permian is that when we do hit that tipping point, it’s going to take a long time for things to get better — millions of years,” she says. “We won’t live to see the Earth recover.”