The first mass die-off on Earth was also one of the deadliest. Scientists continue to piece together the story of what happened. 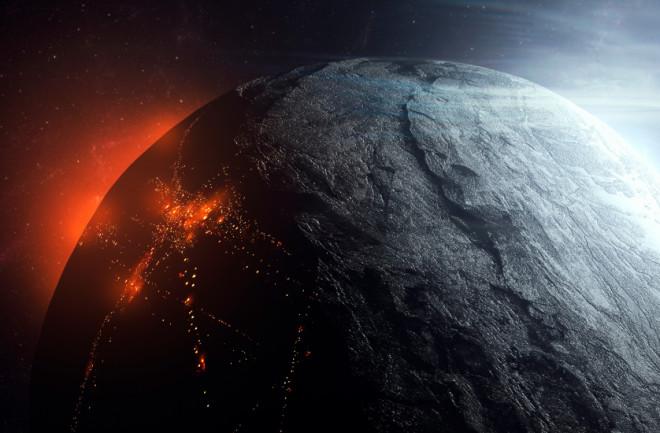 Some mass extinctions unfold like a sloppy murder, leaving clear fingerprints for the keen investigator to uncover. (Asteroids are no masters of subtlety.) The Late Ordovician mass extinction, the oldest of all and the second most lethal, isn’t one of them. Though there is a standard explanation for this granddaddy of death — involving an ancient ice age — the evidence is cryptic enough that experts are still submitting new theories for how 85 percent of all marine species suddenly sank into oblivion.

The planet’s first death knell sounded 444 million years ago, near the end of the Ordovician Period.* Simple forms of life — mainly bacteria and archaea — had already flourished for 3 billion years. Complex life, on the other hand, had only just hit its stride.

In the sequence of geologic time, the Ordivician follows the Cambrian Period, well-known for the evolutionary "explosion" of the same name that populated the world with nearly all the modern animal phyla — the major branches we now see in the tree of life. The ranks of vertebrates, mollusks, arthropods and other broad taxonomic groups still familiar to us today were growing and diversifying at an extraordinary rate — until their abrupt downfall, that is.

“The Ordovician is a very interesting time period,” says Seth Finnegan, a paleobiologist at the University of California, Berkeley, “because you have one of the largest and most rapid biodiversification events … and also one of the largest mass extinction events. Both of them are clearly tied up in physical changes to the environment.”

At the time, most of Earth’s dry land was merged together in the supercontinent of Gondwana, which had drifted so far south that it hovered over the pole like present-day Antarctica. To the north, there were a few minor continents — notably Laurentia, which includes most of North America, and Baltica, which includes the Baltic region and part of Russia — that dotted the tropical and temperate regions around the equator.

Plants and animals were perhaps beginning to venture above water, though nothing near the extent that they would in the coming eras. By and large, most of the action was still happening under the sea, where trilobites, corals and other primordial ocean-dwellers prospered like never before.

Cameroceras (name meaning "chambered horn") is an extinct orthoconic (straight-shelled) cephalopod that lived during the Ordovician period. They were likely a top predator of their time. (Credit: Esteban De Armas/Shutterstock)

Then came their demise. In conventional wisdom, it consisted of two distinct “pulses” separated by roughly a million years. First, glaciers engulfed Gondwana and the planet cooled dramatically, chilling the tropics and mid-latitudes. Sea levels plummeted hundreds of feet. This destroyed vast stretches of the warm, shallow-water habitat that sustained much marine life. Then, in the second pulse, the glaciers melted, the planet warmed, and the ocean rose. The species that had just adapted to the cold struggled once again to evolve fast enough.

It’s unclear what triggered that icy advance. Some studies suggest weathering of silicate rocks — especially in the rising Appalachian Mountains — could have drawn down atmospheric carbon dioxide, lowering global temperatures. Others implicate the expansion of plants, which could have absorbed greenhouse gases while also speeding up silicate weathering. One theory posits that a gamma-ray burst, by converting nitrogen and oxygen into sun-blocking smog, may have brought on the glaciers.

But many researchers are beginning to think that “cooling itself may not be solely responsible for these extinctions,” as Thijs Vandenbroucke and colleagues wrote in a 2015 paper that links some deaths to changing ocean chemistry. They found fossilized plankton with fatal deformities dating to the event, suggesting the release of toxic metals like iron and lead from the ocean depths may have been an important kill mechanism.

Some evidence in recent years even points the finger at glaciation’s elemental opposite: volcanism. The Ordovician extinction, if caused by the cooling climate, would be an outlier. Extreme volcanic activity is widely accepted as a main catalyst in most other mass die-offs, since it leads to inhospitable global warming. Now, with the discovery of mercury deposits from the era, the telltale signature of eruptions has surfaced in this extinction too. Rewriting the story with a fiery culprit would “make the late Ordovician stand out less,” Finnegan says, though he’s not convinced yet.

While scientists are unsure why the majority of species died at this moment, they do understand how those deaths influenced the progression of life. Many extinctions jolt evolution off its course, allowing a host of new organisms to rise from the ashes and fill new niches in a new environment. But not so with the Ordovician extinction.

“The resulting fauna had ecologic patterns similar to the fauna that had become extinct,” writes Peter Sheehan, a paleontologist at the University of Wisconsin, Madison. “Other extinction events that eliminated similar or even smaller percentages of species had greater long-term ecologic effects.” That’s because those long-term effects depend on which level of the taxonomic ladder an extinction acts upon.

The Ordovician, for example, eliminated 85 percent of all species, but only 60 percent of genera and 25 percent of families, the next two levels of classification. Since some members survived in most families, life went on more or less as it would have anyway. The Cretaceous-Paleogene extinction, in contrast, dethroned both orders (an even higher tier of taxonomy) of the dominant dinosaurs. The natural hierarchy inverted, and mammals rose to power.

So, even though it was deadlier than all mass extinctions but the Permian (also known, grimly, as the “Great Dying”), the Ordovician didn’t leave much of an impression. It killed many individual organisms, but decimated no so-called mascot groups — nothing of dinosaur, or even ammonite, stature.

There were casualties, of course. The asaphida family of trilobites — which, with their snail-like eye stalks, are “about as charismatic as late Ordovician fossils get,” says Finnegan — disappeared almost completely. Graptolites, tiny colonial animals that lived together in a single skeleton, also flirted with annihilation. Corals, bryozoans (another colonial creature), clam-like brachiopods, and eel-esque conodonts suffered too.

Fossilized asaphida at the National Museum of Nature and Science in Tokyo. (Credit: Sarunyu L/Shutterstock)

But overall this extinction just wasn’t as selective as most — it didn’t target specific groups over others. In some extinctions, “it matters who you are and how you make your living,” as Finnegan puts it. For example, in the Permian extinction, acidic oceans eroded the calcified shells of many animals, while sparing the uncalcified. “In the late Ordovician event,” he went on, “my sense is that it matters more where you are.”

Most high-level taxonomic groups, happily for them, were widely dispersed. So even as ecological catastrophe struck certain regions, the cousins of the less fortunate persisted elsewhere and upheld the evolutionary status quo. In fact, the fossil record is so similar before and after the event that a rookie paleontologist staring right at the layers might miss the cutoff. “You need to be a specialist,” Finnegan says, “to tell what side of the Ordovician-Silurian boundary you’re on.”

*Author note: It’s likely that the Ordovician event wasn’t actually the first mass extinction ever to sweep Earth, at least in terms of the proportion of organisms killed. In the billions of years before complex life emerged, the planet’s single-celled denizens endured harsh ecological change many times, including so-called snowball Earth episodes that likely locked every living thing beneath a sheet of ice. These and other events surely led to widespread extinction for microbial life.