Pterosaurs May Have "Pole Vaulted" to Take Flight 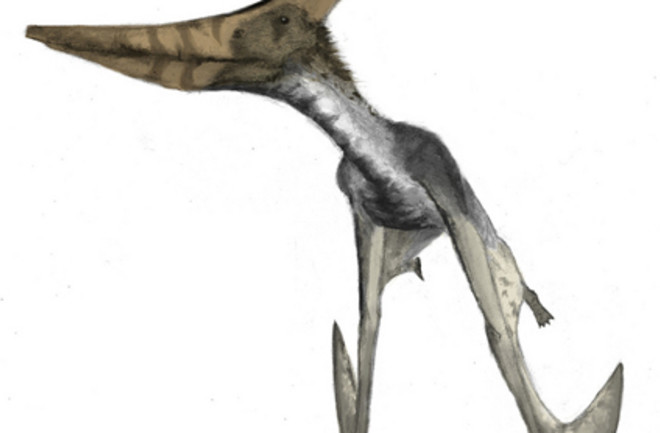 The enormous wings of pterosaurs testify to the idea that these giant reptiles, which lived at the same time as dinosaurs, would have been masters of flight. But there's one thing that nags paleontologists: pterosaur takeoff. Just how does a giraffe-sized creature get off the ground? Not the way birds do, say Mark Witton and Mike Habib, biomechanists who for years have been modeling pterosaur flight, and have a new study forthcoming in PLoS One.

Birds rely on the strength of their legs to leap into the air or run to gain speed for take-off. Pterosaurs walked on all four limbs, and Habib has developed an anatomical model to explore how they might have launched themselves using their small hind limbs and larger "arms" which formed part of their wings. The animal could have launched itself like a pole vaulter, pushing forward with its hind limbs and using its powerful arms to thrust it high enough into the air to stretch its wings and fly away. [New Scientist]

Some bats take flight this way, and the scientists say it makes sense for the pterosaurs, which were built quite differently from birds. Says Witton:

"These creatures were not birds; they were flying reptiles with a distinctly different skeletal structure, wing proportions and muscle mass. They would have achieved flight in a completely different way to birds and would have had a lower angle of take off and initial flight trajectory." [BBC News]

Even if the pterosaurs were masters of the pole vault technique, they still probably needed to be more svelte than some estimates have suggested. According to BBC News

, Habib and Witton estimate the mass of the largest pterosaur to be between about 440 and 550 pounds—lighter than many previous figures. With that mass, the scientists' biomechanical model predicted that pterosaurs could fly thousands of miles once aloft. Unfortunately for them, they couldn't fly away from the extinction event 65 million years ago. Related Content: 80beats: How Did the Giant Flying Reptiles of the Jurassic Period Take Off?

80beats: Pterodactyl-Shaped Spy Plane May Soon Take to the Skies

80beats: Over 200 Million Years Ago, Lizards Glided and Parachuted