Over 200 Million Years Ago, Lizards Glided and Parachuted 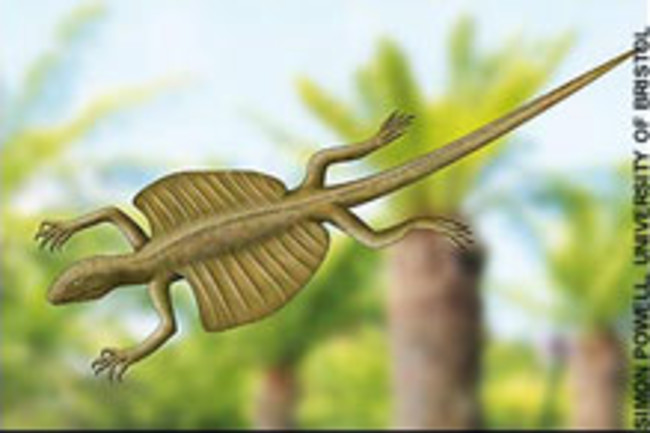 In the primeval forests of Europe, scaly lizards leaped from the treetops and glided safely to the ground, according to a new study. Paleontologists investigated the fossilized remains of two kinds of kuehneosaurs, which were first found in the 1950s in an ancient cave system near Bristol

[The Press Association]. They say that the prehistoric reptiles used extraordinary extensions of their ribs to form large gliding surfaces on the side of the body [LiveScience], which were surprisingly effective for the larger of the two species.

Researcher Koen Stein says: "We didn't think kuehneosaurs would have been very efficient in the air, but all the work up to now had been speculation, so we decided to build models and test them in the wind tunnel in the Department of Aerospace Engineering at Bristol. Surprisingly, we found that Kuehneosuchus was aerodynamically very stable" [Telegraph].

Kuehneosaurus, with stubbier "wings," was more of a parachutist. The ancient reptiles are thought to have lived during the warm late Triassic period, around 225 million years ago. They coexisted with pterosaurs, a powerful order of winged lizards that is thought to have included some species that were adapted for active flight, not just gliding. Both reptiles predate the first known feathered bird, archaeopteryx, by about 75 million years.

Researchers said the Kuehneosuchus could have glided about 30 feet before touching down on the ground, while the

During the study, which is reported in the journal of the Paleontological Association, Stein says the researchers took some wrong turns in their reconstruction of the

. "We also built webbed hands and feet, and had an extra skin membrane between the legs on the models, but these made the flight of the animals unstable, suggesting they probably did not have such features" [Daily Mail].