How Did the Giant Flying Reptiles of the Jurassic Period Take Off? 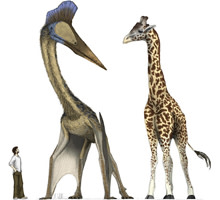 Paleontologists believe that majestic pterosaurs ruled the skies during the Jurassic and Cretaceous periods, soaring overhead on their leathery wings while dinosaurs stomped over the ground below. But researchers recently began wondering how exactly those "winged lizards" lifted off, as some of them weighed more than 500 pounds and were as tall as a giraffe.

Last year, researchers tried to figure out how they got off the ground by looking at the largest bird now flying, the albatross. They concluded that anything much bigger couldn't get off the ground the same way [AP]

shouldn't be compared to birds. "The catch is that they are not built like birds," Habib said [AP].

Habib thinks he has the answer to the pterosaurs' launching maneuver. When the pterosaurs' strong wings were folded they created "knuckles" that the animals rested on in four-legged stance, he says, which allowed them to take off in a motion akin to leap-frogging. The back legs kicked off first, Habib says, and then the front legs gave a mighty push to propel them into the air. This procedure would negate the need for launching aids that other paleontologists have suggested, like strong winds, a downslope, or a cliff to jump from.

"Using all four legs, it takes less than a second to get off of flat ground, no wind, no cliffs," Habib said. "This was a good thing to be able to do if you lived in the late Cretaceous period and there were hungry tyrannosaurs wandering around" [LiveScience].

In his study, published in a special issue of a German journal called Zitteliana (which isn't accessible online), Habib used computer scans to compare the bones of 20 bird species and three pterosaur species. He found that

pterosaurs had much stronger front limbs than legs. The reverse was true of birds. Then, Habib entered the measurements into a numerical computer model to figure out how the animals could have lifted their body weight into the air. Let's say a giant pterosaur relied on the avian strategy (bipedal takeoff): "Basically, the bone in the thigh snaps if you put the amount of force on it that's required to get them off the ground just using the hind limbs for the giants" [LiveScience],

Habib said. Not all pterosaur researchers are convinced: Some say that in Habib's scenario the animals wouldn't be able to unfurl their wings fast enough after launching to take their first flaps, while others just want to see preserved pterosaur tracks that confirm the hypothesis. But pterosaur expert Mark Witton buys Habib's theory, and says it has implications for the bigger question of how pterosaurs evolved. Says Witton:

"[T]his launch strategy may at least partially explain why pterosaurs managed to get so stupidly big while birds have remained comparatively small: Birds can only use their comparatively weak hindlimbs for launching, which may cap their overall size" [MSNBC].