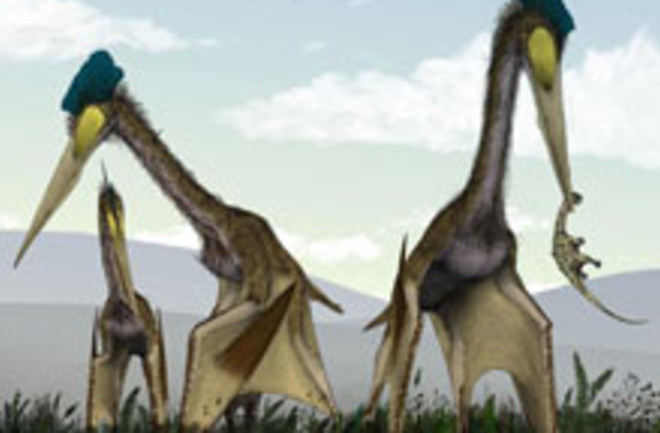 The giant azhdarchid pterosaurs have fascinated paleontologists since their fossils were first discovered in the 1970s. The largest flying animals ever to grace the planet seemed ripped from science fiction: They were taller than giraffes and had wingspans of over 30 feet.

Researchers first believed that these pterosaurs, or “winged lizards,” were scavengers that picked apart carcasses. More recently, paleontologists marveled at the idea of the lizards swooping over coastal waters to hunt like enormous seabirds. Now, after a comprehensive study of the azhdarchids’ footprints and fossils, several researchers have announced their theory that the largest pterosaurs stalked their prey on land like storks, and fed on baby dinosaurs.

The earlier conviction that the azhdarchids fed on marine life came from the discovery of some fossils in former seabeds. However, those fossils were found in many fragments, a sign that the bones may have been transported a long way by rivers before reaching their final resting places [Science News].In the report, published today in the journal Public Library of Science ONE, author Mark Witton says that the majority of fossils were found on terra firma, including one specimen that was found in Texas, more than 250 miles from the prehistoric coastline.

The researchers also studied the giant pterosaurs’ anatomy. The fossil record revealed that the azhdarchids had stiff necks that seemed ill-adapted for hunting from the air, where the animals would have to dip their heads down quickly to snatch their prey from the water. Witton and his colleague Darren Naish believe the stiff-necked creatures would have had more success hunting on land.

“All a terrestrial stalker needs to do is raise and lower its bill tip to the ground” to seize prey, says Naish. Although most people think of storks as waders, the marabou storks that are most like azhdarchids are terrestrial stalkers that forage in grasslands and other inland habitats [New Scientist].

In a final piece of evidence, the azhdarchids had padded rather than webbed feet. Mark Witton said: “The small feet of azhdarchids were no good for wading around lake margins or swimming should they land on water, but are excellent for strutting around on land. As for what azhdarchids would eat, they’d have snapped up bite-size animals or even bits of fruit. But if your skull is over two metres in length then bite-size includes everything up to a dinosaur the size of a fox” [The Guardian].