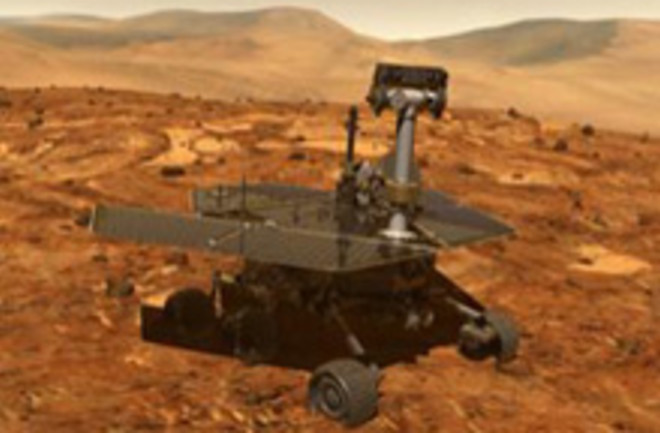 At the ripe old age of five the Mars rover Spirit is starting to show signs of its age, and NASA scientists are beginning to wonder how much longer it can continue to roll across the Red Planet. Over the past few weeks the rover once ignored its morning wake-up call and has unexpectedly rebooted its computer several times. Spirit has also occasionally failed to record its activities in its memory drive, the robotic equivalent of "senior moments." John Callas, project manager for the Mars rovers, says scientists don't yet have an explanation for these glitches, but adds that

the incidents suggest that Spirit is getting erratic. Or maybe just old.... "I don't think anyone can tell you how these rovers will eventually end on Mars," Callas said. "Will they gradually degrade until their mechanical functionality goes or will they have a catastrophic end, where something inside the rover breaks?" [Washington Post]

Spirit is currently exploring a plateau called Home Plate. It's driving backwards, as usual, since it lost the use of one front wheel in 2006. Researchers hope the recent glitches were just transitory problems, but say that even if the incidents signal larger problems with Spirit's computer systems, they'll try to find work-arounds to keep the rover rolling as long as possible. They also note that the two rovers' five-year anniversary on Mars marked a engineering triumph, as their mission was originally scheduled to last only 90 days. Spirit's twin, Opportunity, is in considerably better health, and has embarked on an ambitious 7-mile trek to the Endeavour crater. But both rovers may be tested in the coming months, as the Martian summers sometimes bring huge dust storms that prevent light from reaching the rovers' all-important solar panels.

A storm in July 2007, nearly one Martian year ago, blocked 99 percent of the rovers' sunlight. The storms don't happen every year, but when they do, they start about this time.... [Mission controllers] are keeping an eye on the warming Martian weather, ready to tell the rovers to rest in advance of a dust storm [Popular Science].