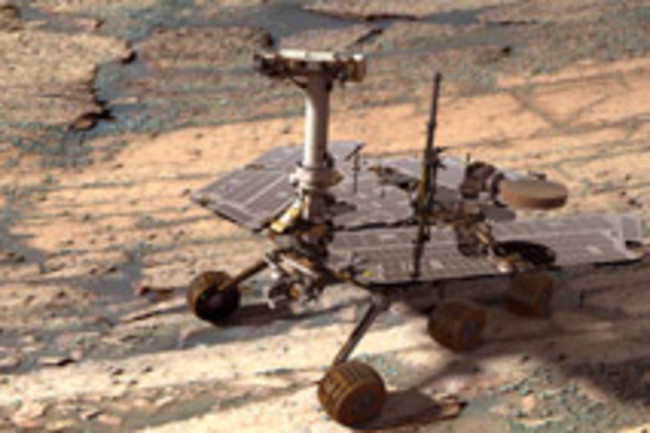 Just weeks after NASA celebrated the Spirit rover's fifth anniversary on Mars, the robotic explorer suffered a mysterious glitch that caused it to freeze in place for a day. The rover couldn't tell NASA what had gone wrong or even what it did for that stretch of time, and it even lost track of the sun.

"We don't have a good explanation yet for the way Spirit has been acting for the past few days," said JPL team leader Sharon Laubach. "Our next steps will be diagnostic activities" [BBC News].

The glitch came last Sunday, which marked Spirit's 1,800th Martian day, or sol, on the planet. NASA sent the rover its driving directions for the day and Spirit acknowledged receiving them, but then it failed to move.

More strangely, the Spirit had no memory of what it had done for that part of Sol 1800. The rover did not record actions, as it otherwise always does, to the part of its computer memory that retains information even when power is turned off, the so-called nonvolatile memory. “It’s almost as if the rover had a bout of amnesia,” said John Callas, the project manager for the rovers [The New York Times].

When NASA directed the rover on Monday to photograph the sun to establish its orientation, Spirit did so but reported that the sun was not in its "expected location." NASA engineers don't think that the malfunction is related to the rover's advanced age, although the mission was originally intended to last 90 days, and both Spirit and Opportunity have a few broken parts. Instead, they say the one-day black out may have been the transitory effect of high-energy cosmic rays hitting the rover's electronics.

While puzzling, Spirit's new glitches don't appear to be a serious concern at present, according to NASA's rover mission chief John Callas. "Right now, Spirit is under normal sequence control, reporting good health and responsive to commands from the ground," he added [SPACE.com].

That's good news, because Spirit has a lot of work to do during the next few months, which are the Martian summer in the southern hemisphere. It's currently en route to two destinations, NASA explained:

"One is a mound that might yield support for an interpretation that a plateau Spirit has studied since 2006, called Home Plate, is a remnant of a once more-extensive sheet of explosive volcanic material. The other destination is a house-size pit called Goddard." Goddard, the agency elaborated, "might be a volcanic explosion crater, and that's something we haven't seen before" [The Register].