The Little Rovers That Could Mark Their Fifth Anniversary on Mars 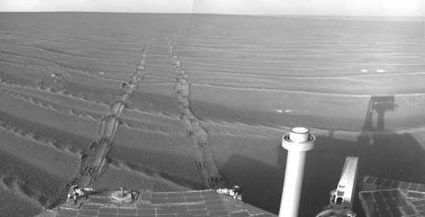 Five years ago on Saturday, the Mars rover Spirit touched down on Mars in a bundle of airbags, beginning a saga of robotic exploration that has delighted NASA scientists and the public alike. The second rover, Opportunity, arrived on the other side of the planet a few weeks later, on January 21.

Combined, the rovers have made more than 13 miles of tracks on Mars' dusty surface and sent a quarter-million images back to Earth. Their instruments have uncovered evidence that Mars was once a far wetter and warmer place than the frigid, dusty world it is now [AP].

The rovers were designed to last at least 90 days on the Red Planet, but NASA had hopes that the robots would exceed their warranty and keep on trucking. However, few expected Spirit and Opportunity to last half a decade in the punishing conditions of Mars. As for what comes next, nobody really knows, says rover project manager John Callas:

"We realise that a major rover component on either vehicle could fail at any time and end a mission with no advance notice, but on the other hand, we could accomplish the equivalent duration of four more prime missions on each rover in the year ahead" [BBC News].

In their treks across craters and hillsides, the rovers have turned up conclusive evidence that the Martian surface once held liquid water, which is thought to be one of the fundamental necessities for the evolution of primitive life. Spirit

uncovered evidence of salts in the soil, a substance that would have been abundant in Martian seas just as it is in Earthly ones. Opportunity discovered deposits of BB-sized pellets — which NASA nicknamed blueberries — that are rich in hematite, a mineral that forms only in watery environments [Time].

Neither rover has discovered any proof that life actually did evolve on Mars billions of years ago, but that doesn't mean they'll stop looking. After five years of punishing cold and fierce dust storms, both rovers are a bit worse for wear. Spirit has one jammed wheel that forces it to drive backwards across the terrain, while Opportunity's robotic arm no longer retracts completely. And Spirit had what amounted to a near-death experience just a few months ago, when a spate of dust storms left the rover's solar panels coated with dust and caused it to go into hibernation mode for a few days. Happily, after the storm passed Spirit succeeded in powering up again. Says Callas:

"This last winter was a squeaker for Spirit.... We just made it through" [MSNBC].

Spirit is now gathering strength from the spring sunlight, and is preparing to drive to several nearby sites in the Gusev Crater, where it was set down in 2004. Meanwhile, on the other side of the planet, Opportunity has set off on an ambitious 7-mile journey towards a 14-mile-wide depression known as the Endeavour crater. The trip is expected to take two years because Opportunity is dawdling along,

stopping on the way to examine interesting rocks [AP].