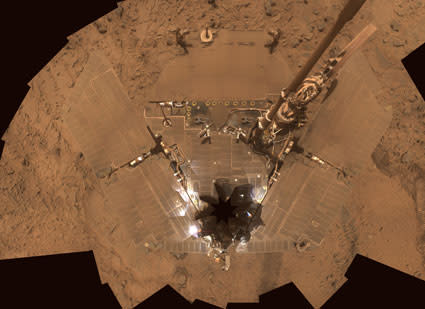 Just after NASA made the sad announcement that the Mars Phoenix Lander had run out of power and ceased communicating, word comes of power problems with the Mars rover Spirit, which has been blithely rolling over the Martian terrain for almost five years. NASA revealed yesterday that dust storms last week left Spirit's solar panels coated with dust and caused power levels to drop to an all-time low, and that the rover then shut down operations and went dormant. Spirit's scientists are now hoping for a message signaling that the rover survived the storm and has recovered power.

Spirit may emerge unscathed. "We are cautiously optimistic that we can get through this dust storm without a catastrophe," says rover project scientist Bruce Banerdt.... That's because spring is dawning in the southern hemisphere, where Spirit is located, and the extra sunlight means the rover needs less energy to run its heaters. Had the storm occurred six months ago, during the local winter solstice, the craft would have less chance of survival, says Banerdt [New Scientist].

The glitch with Spirit was somewhat unexpected, as the rover has plodded on long past its original 90-day mission with relatively few problems, and NASA scientists saw no reason why it couldn't continue for months or years more. In contrast, the Mars Phoenix Lander was never expected to outlive its mission by several years because it's parked close to Mars' north pole, where the cold, dark winter is expected to rob the lander of power and destroy its electronics. Earlier this week, NASA commanded Spirit to turn off all unnecessary heaters to conserve power, and not to communicate with Earth until Thursday.

By then, NASA officials hope, the dust storms will have cleared and the solar panels will be producing more power. After spending much of the southern hemisphere winter parked, Spirit had only started driving again when the dust storms hit. The rover is currently halted at a geological feature called Home Plate. Meanwhile, Opportunity, which has not been compromised by the dust storms to the same extent, is driving to a deep crater [Los Angeles Times].

The ‘Mars Underground’: How a Rag-Tag Group of Students Helped Spark a Return to the Red Planet