How to Win Friends and Influence Monkeys 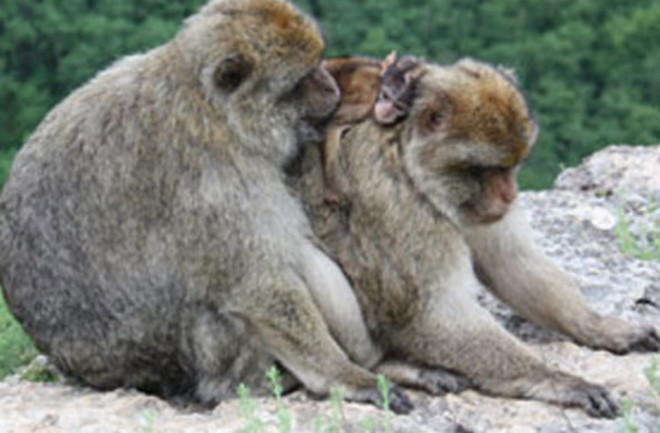 We've all seen this scene being played out in the local park: When a guy walks a cute dog, people don't hesitate to approach him to strike up a conversation about schnauzer breeds. Or there's the guy-with-a-baby scenario, in which the baby-hauling dad is perceived as friendly and non-threatening (not to mention irresistible to some women). Now, new research from France suggests that male Barbary macaques may be onto the same "baby effect" strategy. The study found that male macaques with an infant were more likely to make male monkey buddies, as the presence of a tiny, defenseless baby immediately breaks down barriers. The study, which is due to be published in the journal Animal Behavior, is also the first to demonstrate that infants can serve as social tools for some primates, writes Discovery News.Study coauthor Julia Fischer told Discovery News that when a male Barbary macaque comes across another male with a baby, it sets off a "bizarre ritual."

Fischer said the males "sit together, embrace each other, then they hold up the infant and nuzzle it. Their teeth chatter and lip smack while making low frequency grumbling noises."

The researchers found that the monkeys with babies not only attracted other males for this ritual, they also ended up with quite a few pals this way--which had benefits for these monkeys' social status. Discovery News writes:

Males who worked their networks in such a way tended to rise up the monkey social ladder. For example, one male rose from fifth to second place after acquiring "the highest number of male partners."

What if a social-climbing monkey doesn't have his own kid? No problem. The study showed that monkeys sometimes borrow babies, and proceed to use the infants as friend magnets. But it’s not all fun and games for the bambino-carrying monkeys. The researchers found that, much like human males, the male monkeys got stressed out when the kids started bawling. Related Content: 80beats: Maternal Monkey Love: Macaque Moms Coo Over Their Babies 80beats: Monkey See, Monkey Do: How to Make Monkey Friends 80beats: Do Tricky Monkeys Lie to Their Companions to Snag More Bananas? 80beats: When Baby Monkeys Throw Public Temper Tantrums, Moms Often Give In 80beats: Female Monkeys Chat More Than Males to Maintain Social Ties Image: Andreas Ploss