Monkey See, Monkey Do: How to Make Monkey Friends 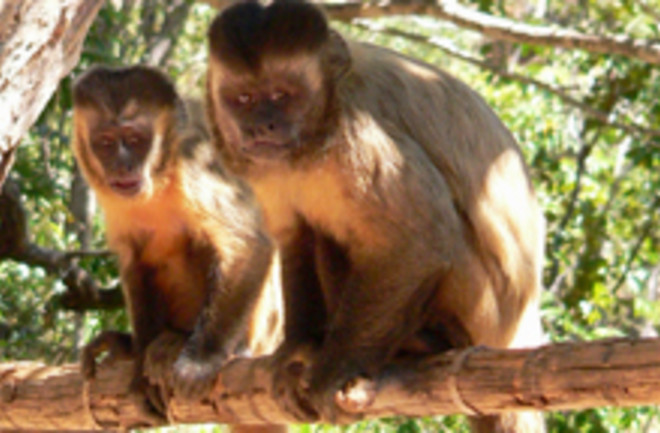 Imitation may be the sincerest form of flattery not just for humans, but for many primates. In human social interactions, people have an instinctive tendency to copy each other's body language and mannerisms, and previous studies have shown that such imitation gives rise to friendly feelings. Now a new study has found that capuchin monkeys respond to imitation in the same way, suggesting that the behavior may date back to early in our evolutionary history. The subtle aping

may promote the formation of social groups—building cooperation, reducing conflict, and aiding the survival of each individual [Scientific American].

To study the behavior in capuchin monkeys, which live in highly social groups of 30 or 40 individuals, the researchers gave each monkey

a Wiffle ball -- a lightweight plastic ball with holes in it. Monkeys typically poked the ball with their fingers, put it in their mouths or used it to pound on something. Each monkey was paired up with two human researchers, one that copied their ball-handling skills, and one that did not. When the balls were put away, the monkeys appeared to prefer the company of the like-minded ball handler [Reuters].

Immediately following the Wiffle ball experiment, researchers tried another. They provided the monkeys with tokens that they'd been trained to hand over to humans in exchange for a treat (in this case, a chunk of marshmallow). Each monkey could hand its token over to either of the two humans and would receive the same reward, but each monkey chose to interact mainly with the researcher who had been imitating its moves. The findings, reported in Science, deal only with captive monkeys. But lead researcher Annika Paukner notes that

in the wild, the monkeys will synchronize certain behaviors--traveling en masse to a food source, eating at the same time, and so on--which may help keep the group harmonious as well as provide safety in numbers. "I think that imitating others unintentionally and unconsciously is a mechanism that is exploited by us humans and capuchin monkeys to regulate social relationships," says Paukner. "Of course, humans are vastly more complex and might use this mechanism in many more ways" [ScienceNOW Daily News].