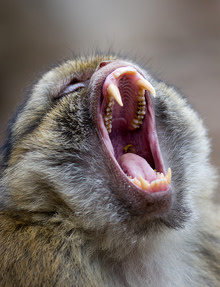 Female macaques are much chattier than male macaques, according to a new study. The researchers say vocal communication is an important part of macaque social bonding and the findings may reflect similar patterns in the evolution of human language. Klaus Zuberbühler, who studies primate communication, says social animals communicate to resolve the constant tension between a

"need to compete and a desire to cooperate" [New Scientist].

The researchers studied macaques living on Cayo Santiago island off Puerto Rico, and for three months they followed a group of macaques that consisted of 16 females and 8 males. Friendly monkey chit-chat included a variety of grunts, coos, and girneys (nasally whines, usually between mother and infant). The researchers counted the social vocalizations, excluding those that were used only to indicate food or predators, and found that females vocalized 13 times more often than the males. Researcher Nathalie Greeno says,

"The results suggest that females rely on vocal communication more than males due to their need to maintain the larger social networks" [News Scientist].

The researchers also found that the females preferred to chat with other females.

Greeno suggests this is because female macaques form solid, long-lasting bonds as they stay in the same group for life and rely on their female friends to help them look after their offspring. In contrast, males, who rove between groups throughout their life, chatted to both sexes equally [New Scientist].

Macaque groups are generally female-centric and may include 20 to 200 individuals. Since female macaques also spend more time grooming each other, many researchers believe language and grooming serve similar social functions. Human language may have evolved as a more efficient, long-distance replacement for grooming.

The findings, published in Evolution and Human Behavior [subscription required],

do seem to echo the (perhaps incorrect) stereotype that women are chattier than men, although the researchers did not make any direct comparisons between macaques and humans. Julia Armstrong, a relationship therapist