Do Tricky Monkeys Lie to Their Companions to Snag More Bananas? 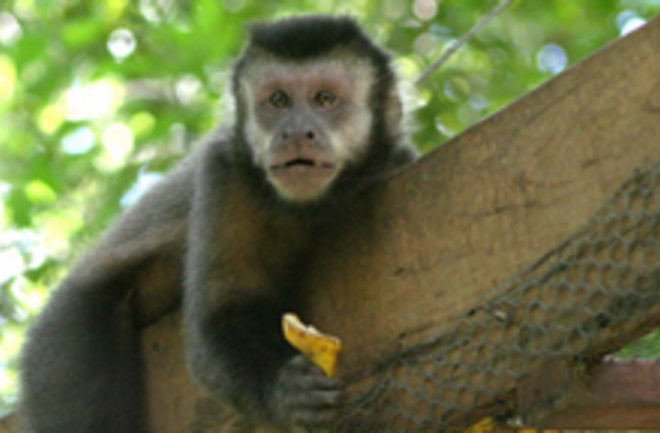 When a banana is at stake, a low-status capuchin monkey may deceive the other monkeys in his troupe in order to get his hands on that tasty fruit. A new study of monkeys in an Argentinian national park found evidence that lowly monkeys give spurious alarm calls in order to scare off more dominant monkeys competing for food. Tufted capuchin monkeys give a two-syllable "hiccup" call when they detect danger, like an approaching ocelot. Lead researcher Brandon Wheeler

was studying a group of capuchins eating food left on platforms constructed in trees, when he noticed some of the monkeys made the calls when predators weren't around. "They were giving the same calls that they give for cats extremely frequently," he says. "When they do, other individuals often run out off the platform, which potentially leaves [the platform] available for whoever called to jump in to get some food" [ScienceNOW Daily News].

For the study, published in the Proceedings of the Royal Society B, Wheeler set about systematically testing the monkeys' behavior by placing highly valued banana pieces on the feeding platforms. He found that alarm calls sounded 10 times more frequently than normal, and that only low-status monkeys gave the calls. About 40 percent of the time, a deceptive alarm call caused dominant monkeys to flee the feeding platform. But Wheeler explains that he didn't prove that the lowly capuchins intentionally deceived their rivals, because he couldn't determine whether

However, it's also possible that the monkeys simply give their hiccup calls in response to stress, and that the low-status monkeys are under stress when they compete for food. But if the

false alarms are deliberate, says Wheeler, they suggest that capuchin monkeys have evolved the ability to predict how others respond to stimuli. "There is a hypothesis called the Machiavellian Intelligence hypothesis, which argues that increased cognitive abilities evolved so that individuals could better compete in the kinds of competitive interactions that inevitably result from living in a group," he says. "One of the predictions of the hypothesis is that deception should be a common behavior" [ScienceNOW Daily News].