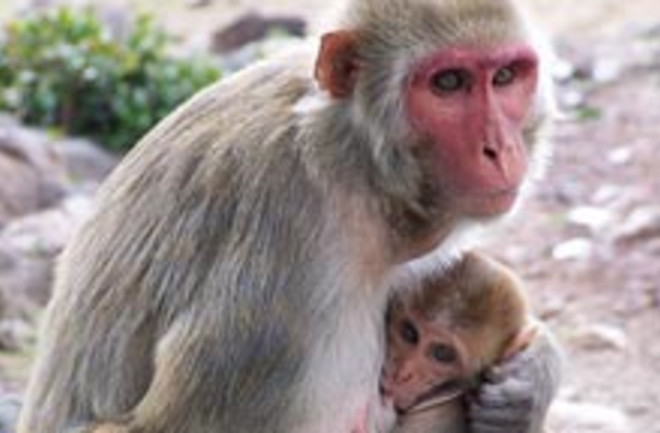 Human toddlers aren’t the only ones who throw tantrums to get their way, and human parents aren’t the only ones who give in, guiltily, to avoid causing a scene. Researchers have found that rhesus macaque monkeys engage in very similar behavior, in which baby monkeys pitch screaming fits until their mothers give in and feed them in order to prevent attacks from irritated onlookers. Explains lead researcher Stuart Semple: “The baby monkeys’ cries are high-pitched, grating and nasty to listen to – not just to their mother but to animals nearby. And we found that the way mothers respond to their crying infants is affected by who is around them at the time” [BBC News].

Researchers observed the behavior of wild monkeys on the island of Cayo Santiago, Puerto Rico. When a baby wanted to nurse but the mom wasn’t willing the shrieks started up, and researchers then monitored the actions of baby, mom, and any other monkeys within six feet. The researchers noted that during a temper tantrum the onlookers seemed bothered and on occasion made threatening gestures, or even chased, grabbed or bit the mother or the infant. Most of the aggression came from monkeys that weren’t close relatives and outranked mom in the social hierarchy. Her relatives proved more tolerant [Science News].

If the baby threw its fit when there weren’t any bystanders, the mother allowed it to nurse only 39 percent of the time, researchers write in the study published in Proceedings of the Royal Society B. But when dominant, unrelated onlookers were nearby, the mother gave in 81 percent of the time. Previous research has found that nonhuman primates pay attention to eavesdropping bystanders, “but this is the first demonstration that communication between mother and infant is affected by an audience,” Maestripieri says [Science News], comments behavioral biologist Dario Maestripieri.

Semple added that while there had been no directly comparable studies carried out on humans, some anecdotal reports suggested that human mothers were more likely to acquiesce to a screaming child if faced with irritated onlookers…. “When I tell any parents of young children about this research, they get it immediately – they’ve felt this kind of bystander effect when their own offspring is having a public tantrum” [BBC News], he says.