Cahokia and Chaco Canyon: The Ancient Cities That Flourished in North America

Two major urban centers flourished in pre-America during a time period that corresponds with the Middle Ages. Here's what's known about the rise and decline of these ancient metropolises. 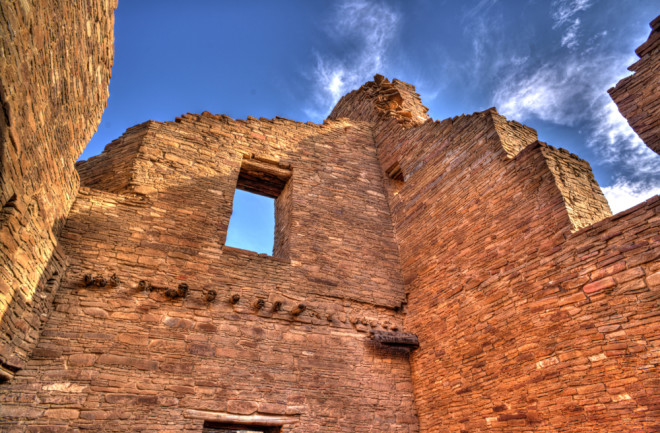 The standard portrayal of pre-Colombian North America (at least north of Mexico) is a vast, unspoiled world speckled with small-scale villages that pale in comparison to the majestic pyramids and ruins of the Aztec, Maya and Inca. “‘Civilization’ is not a word typically associated with ancient North America,” the archaeologist Timothy Pauketat wrote in the opening line of a book that goes on to refute that misconception.

In reality, this continent had its own political and cultural hubs — not as many, perhaps, but far from none. Most significantly, in southern Illinois, the Mississippian city of Cahokia likely boasted a larger population than London around the year 1000. Around the same time, in the remote New Mexico desert, thousands of Puebloans bustled about the engineering marvel that is Chaco Canyon.

Taken together, these overlooked sites dispel the notion that Europeans discovered a land devoid of progress. “Our understanding of American urban history,” wrote historians Lisa Krissoff Boehm and Steven Hunt Corey, “is enriched when we consider in detail the story of populous Native American settlements.”

Cahokia: A Metropolis of Mounds

Eight miles east of St. Louis, a network of artificial hills rises from the floodplain of the Mississippi River, marking what was once the heart of an ancient mound-building civilization. “Metropolis” is no frivolous description of Cahokia — this city, which flourished from about A.D. 800 to 1350, sprawled across 5 square miles and rivaled the European cities of its age. In its heyday, the population was about 15,000, with tens of thousands more spread throughout the surrounding suburbs.

Cahokia, the apogee of the Mississippian culture, consisted of more than 120 massive dirt mounds. Its centerpiece was a 50-acre public plaza (the size of almost 40 football fields) and beside it sat the largest mound in North America, known today as Monks Mound. This 10-story behemoth has a larger base than the Great Pyramid of Giza or the Pyramid of the Sun at Teotihuacan in Mexico. Indeed, Henry Brackenridge, the first person to document the site in detail, was reminded of those other timeworn structures.

“What a stupendous pile of earth!” he wrote to Thomas Jefferson, his friend. “When I arrived at the foot of the principal mound I was struck with a degree of astonishment, not unlike that which is experienced in contemplating the Egyptian pyramids. To heap up such a mass must have required years and the labor of thousands.”

Today these remnants — the Cahokia Mounds State Historic Site, one of the country’s 24 World Heritage sites — are all that’s visible of the city’s former glory. But 10 centuries ago, the mounds were hemmed in by thousands of thatched-roof houses and public buildings. Some researchers believe Cahokia was a planned community, built from a unified vision rather than over many generations of unguided construction.

Its origins remain unclear, but it quickly grew into the highly influential capital of a culture that dominated much of the Midwest and Southeast. “If there were founding events that kicked off Mississippian history,” Pauketat wrote, “they happened at Cahokia.”

The city’s residents lived in a hierarchical society, in contrast to the egalitarianism often associated with Native American life. Archaeologist Thomas Emerson argued that a ruling elite likely held sway not only over political matters, but also over the religious realm. “Only through the brokerage of the elite could [the commoners] have access to spiritual or earthly sustenance,” he writes. “The elite hegemony was complete.”

But for all its grandeur, this new societal model and its leaders collapsed — for unknown reasons — as quickly as they rose. “Within a century of their rise to dominance they had fallen,” Emerson wrote of the brief Native American elite, “and the cosmos was no longer theirs.” "By the time the first Spaniards tramped through Mississippian territory in the early 1500s, Cahokia was a fading memory. However, recent research is challenging the standard narrative around the decline of this urban hub. An analysis of human fecal remains found at the site suggests that a new wave of Native Americans, likely subgroups associated with the Illinois Confederation, called the area home sometime between the 1500s and 1700s.

If Cahokia was the hub of Mississippian culture, Chaco Canyon was its counterpart for the ancestral Pueblo. This desert city prospered in almost the same timeframe, from A.D. 850 to 1250, during which thousands of people somehow thrived in a harsh, barren landscape.

Then, as now, the area was poorly suited for agriculture. Some studies suggest the inhabitants had to import much of their food from the wetter periphery of the San Juan Basin. Nevertheless, this was the unlikely site of a complex, centuries-long construction effort that produced some of the continent’s most spectacular ancient architecture.

Using sophisticated masonry techniques, the ancestral Puebloans built huge multistory stone buildings, known as “Great Houses,” of which a dozen remain (with as many as 150 distributed over the wider region). Perhaps the most impressive is Pueblo Bonito, a semi-circular edifice with more than 650 rooms. Some sections stand four or five stories tall, which means the ancient builders were able to construct from stone “the largest and tallest buildings known in North America until the steel-girder skyscrapers of Chicago in the late 19th century,” Krissoff Boehm and Hunt Corey wrote.

Population estimates for Chaco Canyon range from 2,000 to 6,000, but most people probably didn’t dwell there year-round. More likely, according to the National Park Service, the Great Houses served as impressive public projects, used intermittently to house temporary populations during times of ceremony or trade.

The opulence of Chaco Canyon grew for almost half a millennium, and then its builders abandoned it, also for unknown reasons. But the culture that gave rise to it lives on in other Puebloan settlements from the time, like the Acoma Pubelo of New Mexico, which remains the oldest continuously inhabited site in the continental U.S.