This question is at the heart of the biggest mysteries surrounding Teotihuacan's towering monument. 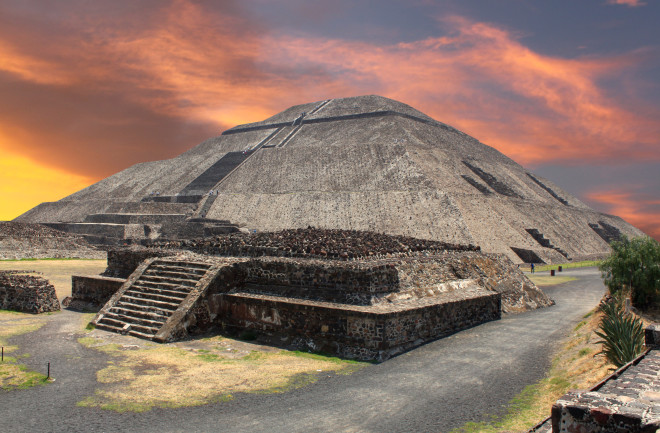 Standing more than 200 feet tall, the Pyramid of the Sun, located in central Mexico about 30 miles northeast of Mexico City, is one of the largest such structures in the world. The building, roughly 1,800 years old, likely contains about 1 million cubic yards of volcanic stone and other materials. It was the grand monument of Teotihuacan, one of the largest cities in the world in its heyday from the second to the sixth centuries.

But who built the awe-inspiring structure? And how was this massive pyramid — which would go on to inspire the Aztecs centuries later — built, and why?

While questions like these continue to perplex scholars and the general public alike, archaeological research over the past few decades has greatly increased our knowledge about this mysterious monument.

The Mysteries of Teotihuacan

Who exactly built the Pyramid of the Sun and other monuments at Teotihuacan? We don’t entirely know, partly because little record remains of the city's ruling class. Archaeologists haven’t even found a burial site they are certain belongs to a ruler in the traditional sense, though the layout of the city suggests a top-down hierarchical structure, says Nawa Sugiyama, an anthropologist at the University of California, Riverside.

Nawa Sugiyama, an anthropologist at the University of California, Riverside, who has excavated beneath the pyramid, says that the city's “master design,” and the way the builders pulled it off, suggests the rulers who commissioned the structure wielded a large degree of power. “You don’t get that out of nothing.”

The Pyramid of the Sun was built somewhere in the first century in the growing city of Teotihuacan, around the same time as the nearby Pyramid of the Moon and Temple of the Feathered Serpent. The city was the capital of an empire that stretched across much of modern day Mexico and possibly into Guatemala. It traded far and wide, and excavations in Maya cities and in Oaxaca to the south also reveal military excursions led by the people of Teotihuacan.

The size of its empire was reflected in the diversity of the city’s residents. But we aren’t sure about the city’s lingua franca, or common language. In fact, the name Teotihuacan itself was given them by the Aztecs much later on, and means the birthplace of the gods. We do know that many languages were spoken there — the city had enclaves of Mayans, Zapotecs, Michoacaners, a Nahuatl-speaking group and others.

The monument was built on some sort of previous structure, although it’s still unclear what this was. It would have required a lot of hands to build, likely carrying baskets of material. “The Sun Pyramid is literally a giant heap of crushed bedrock,” Sugiyama says, adding that lots of soil was added as well. The material is very compacted — the builders may have added moisture to accomplish this, or it might have just been a consequence of the weight of the structure itself.

The end result is a structure that's rock-solid — an important quality in an earthquake-prone area. The exterior is made of vertical retention walls. Just outside those, the pyramid's slope effect is created by “Teotihuacan concrete,” Sugiyama says — basically a mixture of lime and ash. The builders at the time would have covered this in a coating of white lime stucco that they likely painted red and detailed with iconography.

The dimensions and orientation were planned with precision. The pyramid is aligned in such a way that one side faces the Cerro Gordo mountain to the north. Perpendicular to this, the eastern and western sides would have faced the sunrise and sunset on specific dates. David Carballo, an archaeologist at Boston University who has directed projects at Teotihuacan, says these dates correspond to important days on Mesoamerican calendars.

Sugiyama’s father, Suburo, an anthropologist at Arizona State University who also studies Teotihuacan, determined that the builders must have used a standard unit of Teotihuacan measurement. These units were roughly 83 centimeters long — the average distance between the center of a person’s body and the tip of his outstretched arm. Each of the four sides of the Pyramid of the Sun measure about 260 of these units, which corresponds to a 260-day calendar the people of Teotihuacan used for ritual purposes, as well as a 365-day solar calendar.

Scholars believe that the temple would also have served ritual and symbolic purposes. Sugiyama and her colleagues tunneled through the base of the pyramid from 2008 to 2010. They discovered a number of ritual offerings buried under roughly the center of the pyramid, including an eagle with a pyrite disk on its back. (This symbol also appeared centuries later in Aztec iconography showing an eagle carrying the world on its back.)

The team also uncovered a greenstone mask, and the skulls of a puma and a wolf. The Aztecs — who were the ones that dubbed the monument the "Pyramid of the Sun" — associated pumas with the sun because of the cats' golden color. Carballo says that some excavations also have uncovered braziers, incense burners and even a statue of a fire god.

Sugiyama believes the eagle was likely buried alive. And it isn’t the only offering that's been found at the site: Archaeologists have also found the remains of four sacrificed children and two adults near the corners of the Pyramid of the Sun.

The eagle sits above another tunnel, dug around the time the pyramid was built, which ends roughly underneath the pyramid's peak. Only fragments have been discovered in this tunnel, as it was looted in antiquity despite being sealed. But the chamber ends in a room that would likely have held something significant, possibly similar to the lavish artifacts found underneath the Temple of the Feathered Serpent and Pyramid of the Moon nearby.

The Pyramid of the Sun enjoyed several centuries of prominence in Teotihuacan, and likely throughout the greater region. But all good things eventually come to an end. Sometime between A.D. 550 and 600 — around the time the whole city begins to show signs of decline — the pyramid was burned in a ritualistic "termination."

In the Mesoamerican world, these kinds of events were quite common. Even contemporary Maya people still practice the tradition, Carballo says. In many spiritual traditions in the region, buildings are seen as anthropomorphized — even living — entities. The termination can occur for a number of reasons. Inhabitants themselves might burn it. Or an invading army might ritually destroy and burn monuments, talismans of power and buildings to symbolize their spiritual, as well as physical, dominance over the conquered society.

It’s still unclear which of these reasons led to the burning of the Pyramid of the Sun and many of the surrounding temples and monuments. Carballo says it’s possible that tensions arose between the various ethnicities living in the city; an influx of immigrants from elsewhere in Mexico may have begun to clash with the other city dwellers. Some researchers also theorize that the Teotihuacan elites were being challenged by other powerful players at the periphery of the state.

Meanwhile, the large volcanic eruption of Ilopongo in El Salvador around this time could have worsened crop yields and exacerbated inequality in Teotihuacan, creating tensions in the population. But “there’s no smoking gun here, and I can imagine it being a multi-causal thing,” Carballo says.

In any case, the symbolic importance of the pyramid itself lived on far longer than the civilization at Teotihuacan. The Aztec ruler Moctezuma claimed to have visited the area every 20 days, and the Aztecs built their own altars at the foot of the pyramid, Sugiyama says.

More than a millennium after the pyramid was ritually destroyed, Porfirio Díaz ordered the Pyramid of the Sun refurbished for his 1910 inauguration — one of the first Mexican archaeological sites to be rebuilt. The inauguration coincided with the centennial celebration of Mexico’s independence from Spain, and the refurbishing wasn’t that different from the Aztecs’ own efforts to connect their state with that of the past.

“The impetus for reconstructing [the pyramids] are connected with nationalist identity,” Carballo says.

Though archaeologists have criticized the rebuild as being partly inaccurate to the original structure, Sugiyama says the monument still serves as something that imbues visitors from around the world with awe.

“It’s still doing what it’s meant to do,” she says. “It stills attracts millions of people today.”

More From Discover
Mind
Nostalgia and Thinking About the Future Can Be Good For You
Health
Could COVID-19 Be Changing Who We Are?
The Sciences
Was Nefertiti Egypt’s Leading Lady Before King Tut?
Planet Earth
These 5 Animals Trip on Psychedelic and Psychoactive Drugs, Too
Planet Earth
We’ve Been Worried About Overpopulation for Millenia
Technology
What’s Dynamic Pricing? An Operations Management Scholar Explains
Recommendations From Our Store
My Science ShopDiscover STEM Kits
My Science ShopDiscover 2022 Calendar
My Science ShopStrange Science
My Science ShopElements Flashcards
Shop Now
Stay Curious
Join
Our List