The archaeological site is famous for its 1400 A.D. abandonment. But new research suggests people soon moved back in. 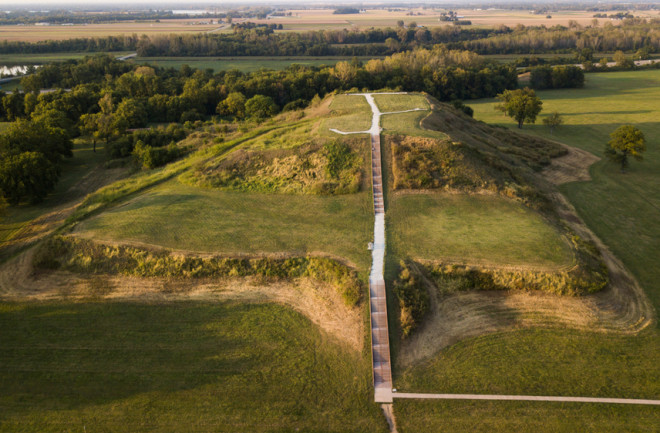 Monk's Mound, the largest Pre-Columbian earthwork in the Americas, was built by Native Americans living at Cahokia. (Credit: MattGush/Shutterstock)

The mound-building society that lived at Cahokia is one of America’s most famous — and mysterious — ancient civilizations. The Mississippian people thrived for centuries in what is now Illinois’ Mississippi River valley, just outside of St. Louis, until they mysteriously vanished sometime around 1400 A.D.

It's a tempting story, one that plays on the inherent romanticism of a "lost" civilization, and all its attendant drama. But archaeologists know that's not really the case. The people at Cahokia didn’t disappear — they more likely just relocated when conditions took a turn for the worse.

“If you keep portraying this as a ‘lost civilization’ that had a decay or a collapse or a failure, it makes you think they just went away; they disappeared," says A.J. White, a graduate researcher in anthropology at the University of California, Berkeley.

“But people don’t disappear,” he continues, “What happened is that people decided the best strategy was to move perhaps into smaller groups and move to other regions.”

Now, a new study reveals that the site wasn’t vacant for long, either: After its famous abandonment, another group of indigenous people moved in.

Past work found evidence that changes in flood frequency at the site, which sits in the Mississippi floodplain, likely catalyzed the boom and subsequent bust of the population.

“Environmental problems could put a lot of stress on whatever cultural issues might have been going on,” explains White. “And that might relate to economic, societal, political sort of problems — a combination of pressures that were exerted on this area.”

The tens of thousands of people that lived in the area at its peak, the Mississippians, lived in a largely agricultural society. The Cahokia site was the hub, serving as a seat for rulers, a market for traders and artisans, and, famously, the location of their giant earthen mounds. These man-made mountains can reach 100 feet high, and are thought to have served a variety of purposes, from elevating important structures to serving as burial grounds.

New Kids on the Mound

The vast majority of work at Cahokia has focused on the rise and fall of the Mississippian population at the site. But in a new paper, White and his colleagues looked for evidence for a significant human presence in the centuries after the famous abandonment. As it turns out, after the Mississippians left someone else moved in.

The researchers looked to sediment cores taken from the area, in search of a compound found in human feces. Long-lasting molecules called fecal stanols are made by the bacteria in human guts as a by-product of digesting cholesterol. As the researchers look back through the sediment layers, they can measure stanols to get a sense of how many people lived in the area over time.

The new evidence suggests the population at the site rebounded by 1500, peaked again in 1650, and declined once more by about 1700. The researchers think the new arrivals were from the Illinois Confederation — they weren't Mississippians. This new group of indigenous people had a slightly different way of life, supplementing some agriculture with more focus on bison hunting. They were more mobile.

What’s more, pollen records from the sediment cores suggest that the area saw an ecosystem shift around that time, too, as evidence for trees gives way to evidence for grasses. And who lived in grasslands? Bison.

By the way, the name Cahokia? It’s not from the mound-building Mississippians. When French missionaries arrived in the area in the early 1700s, they were met by the Cahokia tribe — a subgroup of the larger Illinois Confederation. The name stuck, and now “Cahokia Mounds” is a bit of a misleading moniker for the archaeological site.

The evidence in the new study can neither confirm nor deny that the members of the Illinois Confederation that lived at the site from 1400 to 1700 were, in fact, the namesake Cahokia tribe that had first contact with the French. If it were the case, though, it’d bring the story of the Cahokia site full circle across its history.