Alcoholic Fruit Flies Don't Know When to Say When 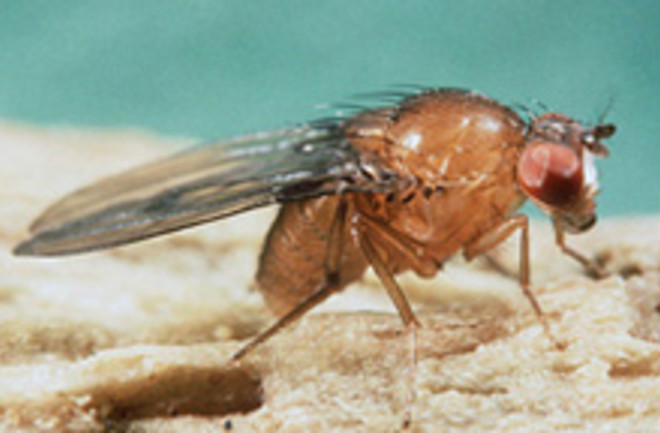 Despite their tiny size and short lifespan, fruit flies are familiar test subjects in labs because they can show us a lot about ourselves, particularly in terms of genetics. And in a study for Current Biology, a team led by Anita Devineni found that the insects have another thing in common with people—they like alcohol, sometimes a little too much. The scientists started by giving their test subjects a choice.

Flies held inside vials could sip from thin tubes holding either liquid food spiked with 15 percent ethanol or plain liquid food. The researchers measured the descent of the liquids inside each tube to get a readout of which food the flies preferred [Science News]

. It was no contest:

The flies preferred the alcohol-spiked food, and the more they had it, it seems, the more they craved it—the flies' tipples grew more frequent over time [National Geographic News]

. Researchers found other signs of addiction similar to human alcoholism. When they upped the alcohol content from 15 to 25 percent, flies who hadn't been drinking didn't care for the harder stuff, but those already accustomed to alcohol slurped it up.

When the researchers laced the booze-food mix with small amounts of the toxic chemical quinine, those flies continued to drink, even though fruit flies normally avoid the chemical. “I was actually pretty surprised when they continued to drink it,” Devineni says [Science News]

. That alcohol has strong effects on fruit flies is unremarkable; other studies have shown that. But Devineni's study offered the flies a choice to drink or not, which revealed some new ways it can change them. Her team found that flies even relapse: those allowed to drink for a few days and then forced to abstain for a day or two went right back to boozing at peak levels when the scientists offered the spiked food again. The team hopes to investigate the genetics behind this behavior in the future, in hopes of zeroing in on the genetic component of alcoholism in humans. Related Content: 80beats: Tiny Tree Shrews Live on Alcohol, But Never Get Drunk 80beats: Cheesecake is Like Heroin to Rats on a Junk-Food Diet 80beats: Fetal Alcohol Exposure Makes For Booze-Loving Rats Discoblog: A Scientific Defense of Beer

More From Discover
The Sciences
The Truth About Truth Serum
Health
What Does Full FDA Approval of a Vaccine Do If It’s Already Authorized for Emergency Use?
Health
Strange Symptoms After Heart Surgery Exposed a Teen's Secret Struggle
Health
Can You Overdose on Marijuana?
Health
Ibogaine: The Psychedelic Drug That Could Fight Addiction
Health
The Other Magic Mushroom: Why a Canadian Startup Is Suddenly Interested in the Fungus From Super Mario
Recommendations From Our Store
My Science ShopDiscover STEM Kits
My Science ShopDiscover 2022 Calendar
My Science ShopStrange Science
My Science ShopElements Flashcards
Shop Now
Stay Curious
Join
Our List