A Scientific Defense of Beer

As a former bench scientist who sips a beer on occasion, I was intrigued by an article that ran in The New York Times science section yesterday about the inverse relationship between a scientist's success and the amount of beer he or she consumes. Dr. Tomás Grim, an ornithologist from Palacký University in the Czech Republic, surveyed the beer-consumption habits of 18 Czech scientists in 2002 and 34 in 2006 (some of whom were the same as those surveyed before), and found that the more beer a scientist drinks, the fewer papers she publishes, and the lower the quality of those papers. In short, less successful scientists drink beer. 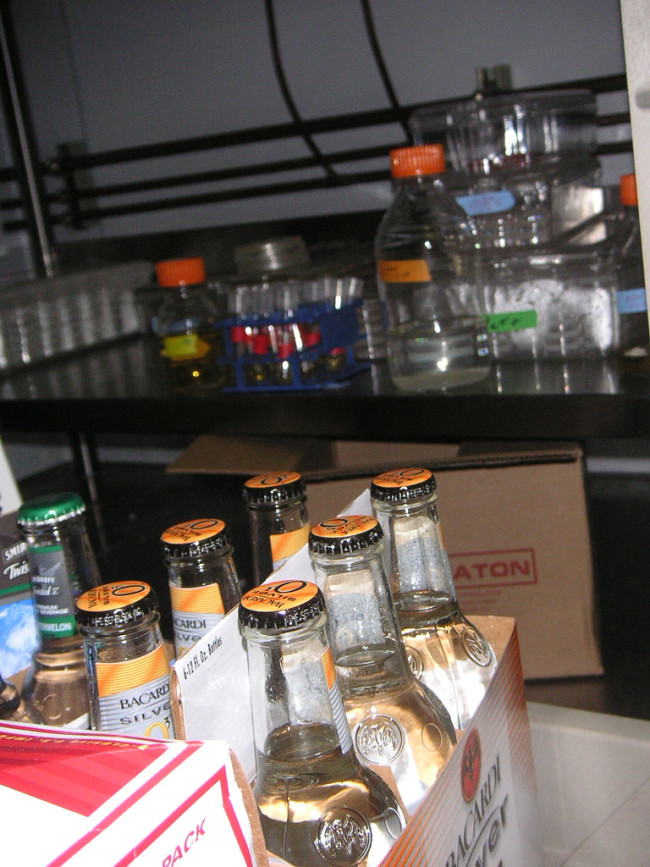 In his publication (subscription required), Dr. Grim declares that his motivation for the study was that "alcoholic drinks negatively affect human cognitive capabilities that are critical for... a demanding activity as producing high quality science." He also points to alcohol's other long-term negative effects such as depression and alienation, and compares these to the effects of other recreational activities "e.g. mountain climbing or picking mushrooms [pdf]," which "do not extend beyond the mere time spent with the activity." Oh, and Dr. Grim "on occasion enjoys more than 12 beers in a night,"* so one might conclude that he's a case study of the suds phenomenon. As for the findings, they're pretty suspect. There is a single figure in the paper—a graph that compares "Beer Consumption" to "Publications per Capita per Year"—that makes it seem like the majority of the effect is from a mere five outlying bacchanalians (four from 2002, and one from 2006—who may have also been one of the four from 2002). These five had barely any publications, and drank an enormous amount—but which is the cause and which is the effect? The author of the NYT article, Carol Kaesuk Yoon, notes that Czech Republic has the highest rate of beer consumption in the world, so it seems quite possible that the failed scientists are drowning their sorrows. Another suspect item from Yoon's article is she claims that the journal in which the article was published, Oikos, is "a highly respected scientific journal"—which is a bit of an exaggeration. Oikos's impact factor, which is a measure of the impact a journal has on the scientific community, is 3.381—compare that to Science**, which has an impact factor 30.028. It might be a bit unfair to compare a beer-drinking study's journal to one of the most esteemed publications of science world, so you could also restrict the comparisons to within Oikos's subcategory—which turns out to be ecology. Out of all the peer-reviewed ecology publications, Oikos has the 14th highest impact factor—not bad, but not a "highly respected science journal." So party on, Tesla.

Image courtesy of SnickClunk via CreativeCommons.

*The original text referenced Pubmed and claimed that Dr. Grim "had only two English publications in the past nine years." Dr. Grim's publications are listed here. **see comments