What Can Your Farts Tell You About Your Health? 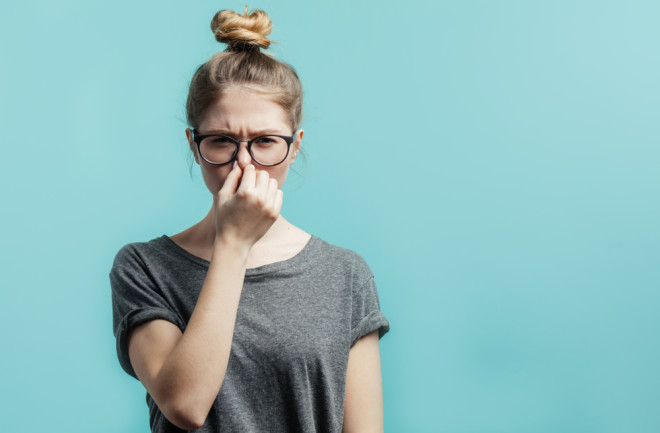 What do the President of the United States, Harry Styles, and your next-door neighbor all have in common? Farts.

Whether you find farting improper or you’re someone who isn’t afraid to let it rip, everyone cuts the cheese one way or the other. Your body is designed to fart, and you can expect an average of 10 to 20 farts per day, says Harvey Hamilton Allen Jr., a gastroenterologist at Digestive Disease Medicine of Central New York. He says the human body can hold up to 1,500 milliliters of intestinal gas; that’s almost the size of 6 cups of water. “Studies have shown that people perceive that they're passing a lot of gas," says Allen. "But pretty much people before and after they eat have an equal amount of gas. So it’s just the perception that this is abnormal."

Farting is a natural by-product of your digestive system that lets you know your food has been properly digested. But farts are more than White Castle’s revenge; they can also act as a treasure trove of medical secrets. Whether you’re passing gas from the attic or the basement, your smelly, frequent, or loud farts may be signs of an underlying health condition.

If you’re frequently tooting your horn, it could be a sign of pregnancy. When you’re pregnant, your body goes into overdrive producing many hormones, including progesterone. Progesterone helps to create the lining of the womb and maintain it throughout pregnancy. That’s because progesterone wears many hats and also acts as a smooth muscle relaxant. Increased progesterone can relax and slow down the digestive tract.

Inessa Khaykis, a gastroenterologist at Vanguard Gastroenterology in New York, says that excess gas during pregnancy could also come from the baby pressing on the intestines as it expands during pregnancy. “[Those are] just one of the symptoms that could be associated with abdominal distension and excessive gas production," she says. "Bacterial overgrowth and some parasitic infections are other conditions that can lead to accumulation of fluid in the abdomen that also could exert pressure on the digestive tract.”

Lactose intolerance is another reason for excess gas. Even if you’ve never had trouble eating dairy before, chances are you’ll probably get it as you age. By age 20, 30 million Americans become lactose intolerant, and about 65% of the entire human population has a reduced ability to digest lactose after infancy.

Dairy products are broken down by an enzyme known as lactase, but the body makes less of this protein after our early days. Low lactase levels make it hard to digest, and then it gets passed along to the bacteria-populated colon. These bacteria end up breaking down the lactose, but at a cost. “The bacteria have a picnic at our expense with all the fermentation and gas production that goes on after,” says Khyakis.

Your Mental Health is Taking a Toll

If you’re feeling anxious before your big meeting at work, the butterflies in your stomach may actually be gas. Scientists have recently found a connection between mental health and gas production. One study presented at UEG Week Virtual 2021, a European gastroenterology conference, found that extreme burping and farting are associated with stress, anxiety, and depression symptoms.

According to the American Psychological Association, stress and anxiety tense up your muscles in response to an impending threat. Your tensed-up muscles include the stomach muscles, causing a slowdown in digestion. Not processing your food efficiently makes it pass more slowly, resulting in a gassy stomach. Additionally, stress makes it harder to swallow food and may increase the amount of air in each swallow. The outcome is an increase in burps and farts.

There’s nothing abnormal about farting. But if you’re breaking wind and feeling pain from doing it, it could be a sign of cancer. This is because cancer can build up gas in the digestive tract, making you pass gas more often.

One of the signs of stomach cancer is excessive farting paired with abdominal pain, bloody vomit, and bad breath. Pancreatic cancer creates indigestion and makes it difficult to break down food and absorb nutrients, causing gas and bloating problems. Colon cancer and Crohn’s disease can block your intestines and cause gas to build up.

In short, as you age, you’re more likely to develop health problems that predispose you to produce more gas.

While older adults have recently been getting less abdominal surgery, people who need surgery to repair hernias and bowel disease are at risk for sticky bands of tissue known as abdominal adhesions. Khaykis says adhesions slow down the intestinal tract. The relaxed intestines can lead to an overgrowth of intestinal bacteria in the gut microbiome. The more vibrant bacterial population you have, the more gas bacteria can produce.

Another potential reason is diabetes. The risk of diabetes increases as you get older, and an unintended consequence is increased flatulence. “As we get older, people develop diabetes, and they can take medications for other health-related issues that might slow down their digestive system," explains Khaykis. "That can change the gut flora, which can lead to excessive gas production.

When to See a Doctor

When in doubt, you may want to see your doctor if something doesn’t feel right. “If something is bad or perceived as being off, it is just safer to check because a lot of underlying medical conditions can present very similarly," says Khaykis. "So, your doctor can sift through additional signs and symptoms to arrive at the right diagnosis."

Allen agrees that you should not to hesitate to see your doctor if the roar from your rear is changing your quality of life. While most people with abdominal discomfort feel better when they pass a little gas, red flags should go up in your head if you also experience severe diarrhea, vomiting, abdominal tenderness, nocturnal abdominal pain and rapid weight loss.

How to Stop Farting

Most of the time, farting is normal and just another part of our smelly existence. But if you don’t want to doom yourself to rotten egg-like farts for the rest of your life, Allen says there are ways to minimize gas production.

Most excess and foul gas comes from the food you eat. Limiting certain foods may help pinpoint the cause behind your bottom burp. For example, milk products and sugar-free candies with sorbitol — also found in fruits such as peaches and apples — can make you gassy. Whereas foods such as chicken, onions, and coffee tend to have odorous gases because of a naturally smelly compound known as sulfur.

Gas can also be a result of swallowing too much air. “Most people swallow a lot of air if they eat too fast or gulp their food," says Allen. "Smoking and chewing gum [also] increases swallowing, and that’s a very common thing."

Still, farting is unavoidable, and you shouldn’t entirely cut out gas-producing foods like broccoli and beans just because they make you cut the cheese a bit more than usual.  You’re going to fart, and that’s okay. Even if you find it embarrassing, it's good to remember that farting is as natural as breathing.

More From Discover
Health
This is How Much Water You Should Actually Be Drinking Each Day
The Sciences
Your Body, the First 5 Minutes After You Die
Health
A Blood Test That Screens For Multiple Cancers At Once Promises To Boost Early Detection
Health
Feeling Sleepy After a Thanksgiving Meal? It Might Not Be the Turkey
Health
There's a New Group of Blood Types — Here's Why it’s Important
Mind
3 Unique Ways We Can Remember The Past
Recommendations From Our Store
My Science ShopDiscover STEM Kits
My Science ShopDiscover 2022 Calendar
My Science ShopStrange Science
My Science ShopElements Flashcards
Shop Now
Stay Curious
Join
Our List