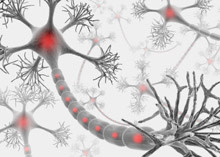 Infusions of stem cells taken from multiple sclerosis patients' own bone marrows have shown great promise in rolling back symptoms of the disease. In a small study, researchers found that 81 percent of the participants still showed some improvement three years after the treatment, and the rest of the patients had not deteriorated.

"All therapies to date ... have focused on slowing the progression of disease," said [lead researcher] Richard Burt.... "What this actually did is that it reversed disability. This is the first time we have turned the tide on this disease" [Chicago Sun-Times]

. In multiple sclerosis, or MS, the patients' immune systems turn on their own central nervous systems, stripping the protective myelin sheaths from nerve fibers and leading to problems with vision, balance, and coordination. The researcher team tested the new treatment on 21 patients in the early stages of the disease, when symptoms alternately flare up and recede. Burt and his colleagues

had previously tried using stem cells to reverse this process in patients with advanced stages of the disease, with little success. "If you wait until there's neuro-degeneration, you're trying to close the barn door after the horse has already escaped," says Burt. What you really want to do is stop the autoimmune attack before it causes nerve-cell damage, he adds [New Scientist].

The stem cells were then transplanted back to replenish the immune system - effectively resetting it [BBC News].

The stem cells developed into immune cells that did not see the myelin sheath as alien, and therefore did not attack it. One of the success stories is 24-year-old Edwin McClure, who was first diagnosed with MS during high school when his vision suddenly deteriorated.

"It was like someone had turned down the dimmer switch,” he said.... He also suffered from dizziness, poor balance and fatigue so bad that he’d collapse and sleep for three hours every day after school [Bloomsberg].

After several years of receiving conventional drug treatments and seeing their beneficial effects wane, McClure went to Chicago to take part in the stem cell trial in 2005. He

spent a month being treated, and hasn’t needed any drugs since. “It’s a blessing,” he said. “My disease has been halted” [Bloomsberg].