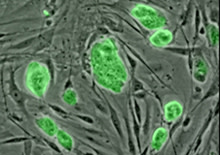 Clinics around the world are offering unproven stem cell treatments to desperate patients with diseases like Parkinson's and multiple sclerosis, a new report says, and consumers should be on the lookout for snake oil salesmen. A new set of guidelines issued by the International Society for Stem Cell Research (ISSCR) gives consumers some hints on how to identify the scammers:

Beware, it warns, of clinics claiming to treat multiple diseases with the same cells, boasting that there is no risk, and offering patient testimonials - rather than results from clinical research - as evidence that their treatment works. "Patients want to believe so much that a treatment is helping them that they can convince themselves that is has" [New Scientist]

, the guidelines caution. In an accompanying study in the journal Cell Stem Cell, researchers examined the direct-to-consumer advertising that shady clinics use to attract customers. They looked at 19 Web sites that advertised stem cell treatments in several countries, including China, Mexico, and Russia, suggesting that stem cell clinics are becoming a lucrative part of the "medical tourism" industry. Researchers wrote:

"The average cost of a course of therapy among the four websites that mentioned costs was $21,500, excluding travel and accommodation for patients and care givers. And examples of serious treatment side effects can be found" [Reuters]

for the types of treatments being advertised. Stem cells, found in embryos and certain adult body tissues, can grow into many different types of cell; researchers are investigating ways to use them in regenerative medicine, in which damaged cells or even whole organs could be replaced. While the research is still in its early phases, news reports of potential treatments and cures have raised the hopes of many patients, ISSCR official Sean Morrison says.

"There are many doctors tapping into the public's sense of stem cells' potential to cure in countries with looser medical regulations.... But the details of stem cell treatment are much more complicated" [National Geographic News].

The survey of Web sites advertising stem cell treatments found that the clinics offered to treat a wide range of ailments including Alzheimer's, spinal cord injury, blindness, and heart disease. The survey found that the sites often played down the experimental nature of the treatments and made little mention of the side effects that could result. "I think these Web sites are dangerous," said [George] Daley, a Boston stem cell researcher. "They overpromise effectiveness and safety of the therapy and they completely underestimate and underinform about risks. ... (Such) overhyped marketing directly to the patient is putting patients at risk of financial exploitation at the very least, and physical danger at the worst"