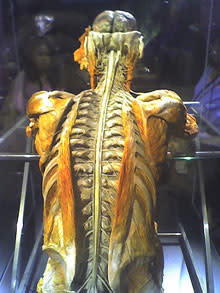 The first clinical trial of a therapy based on human embryonic stem cells has received the green light from the FDA, marking a scientific and political milestone for embryonic stem (ES) cell research. The biotech company, Geron Corporation, received approval today for a study that would inject neural stem cells into patients suffering from spinal cord injuries. The study will be mainly a test for safety, but functional improvements, which have been observed in animals trials, may be possible.

"For us, it marks the dawn of a new era in medical therapeutics. This approach is one that reaches beyond pills and scalpels to achieve a new level of healing," Geron Chief Executive Dr. Thomas Okarma said [Reuters].

ES cells are taken from embryos a few days after fertilization and have the potential to differentiate into any type of cell in the body. The undifferentiated cells

can't be used directly, because they can form cancers called teratomas. But they can be used in the lab to generate potentially inexhaustible supplies of all other types of cell[s] that might be needed for repair. The type to be used in the trial are neural stem cells called oligodendrocyte progenitor cells. These support other neurons in the brain and nerves by supplying growth factors and by producing the myelin sheaths that protect neurons from damage [New Scientist]. The FDA will allow Geron to implant these neural stem cells directly into the spinal cords of eight to ten paraplegics. The trials are expected to begin this summer, and may be carried out in multiple medical centers. The patients have not yet been recruited because the injections must take place within two weeks of the spinal cord injury, before scar tissue forms.

Researchers hope that the therapy will induce damaged nerve cells to generate new myelin. In experiments on mice with paralyzed hind legs, the therapy was able to restore some mobility and autopsies revealed regenerated myelin. Researchers will be looking for signs of functional improvement in human patients, but they emphasize that the treatment will not get anyone out of a wheelchair.

"Any return of bladder or bowel function, a return of sensation, or a return of lower extremity locomotion would be a very exciting finding," Okarma said [HealthDay News].

If the human trials prove to be safe, expanded trials involving more severely disabled patients and larger injections may follow.

Okarma said the treatment should eventually become cheap and easy to mass produce because the cells can be grown in vats. He believes the cells may be useful for other diseases such as multiple sclerosis, in which nerve cells are stripped of their insulating sheaths, and perhaps strokes [Reuters].

Earlier this week, ReNeuron, another biotech company which had been unable to gain FDA approval, received the go ahead from British regulators to test an ES cell-based therapy on a dozen stroke patients in Scotland. That trial, which would inject neural stem cells into the brains of stroke victims, is also set to begin this summer. Related Content: 80beats: Vatican's New Bioethics Rules Grapple With 21st Century Medical Advances 80beats: Researchers Create Stem Cells Without Cancerous Side Effects 80beats: 5 of 21 Federally Approved Stem Cell Lines are Ethically Tainted

The arrival of the FDA's landmark decision just days after President Barack Obama's inauguration has not gone unnoticed;

President Barack Obama has promised to relax the Bush administration's restrictions on federal financing for such research. But Obama's ascent to the White House had nothing to do with the U.S. Food and Drug Administration's granting permission for the new study, Okarma said... In fact, the company says, the project involves stem cells that were eligible for federal funding under Bush, although no federal money was used to develop the experimental treatment or to pay for the human study [AP].