When animals are displaced by deforestation and global warming, that often puts them and the diseases they carry in proximity to humans. 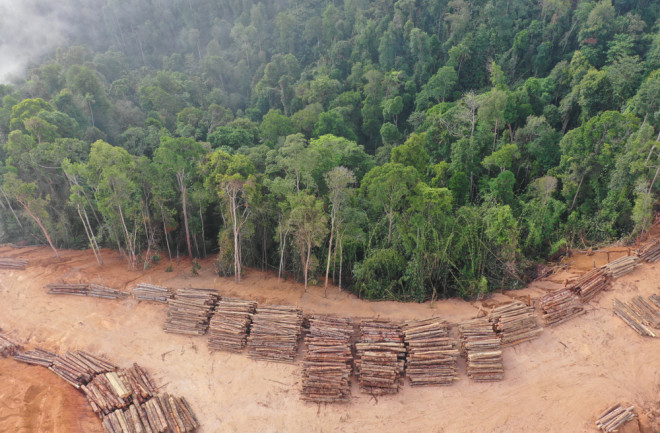 An aerial photo of logging in the Malaysia rainforest. (Credit: Rich Carey/Shutterstock)

Scientists have long warned that our warming world could cause more diseases from wildlife to spill over to humans and spread around the world. Now, a study published this month in the journal Science of the Total Environment makes the case that climate change played a direct role in the emergence of SARS-CoV-2, the virus that caused the COVID-19 pandemic.

The research, which comes from the University of Cambridge’s Department of Zoology, explains that climate change-related temperature increases, more sunlight, and increased atmospheric carbon dioxide (affecting plant and tree growth) have expanded bat-friendly forest habitats in Myanmar, Laos, and southern China — where SARS-CoV-2 may have originated. According to the work, 40 bat species have moved into the southern Chinese Yunnan province in the past century, bringing 100 more types of bat-borne coronaviruses to the area.

According to the U.S. Agency for International Development, “nearly 75 percent of all new, emerging, or re-emerging diseases affecting humans at the beginning of the 21st century are zoonotic,” meaning they originated in animals. And bats carry more than their fair share of pathogens that could infect us. Each bat species hosts an average of 2.7 coronavirus strains. Their presence is closely correlated to the number of these spike-studded viruses found in an area — which could mutate and infect humans.

An image from the study shows how climate change — accelerated by greenhouse gas emissions — altered the forests of southeast Asia regions over the past century. A once tropical shrubland has transformed into savannah and deciduous woodland, an environment that allows more bat species to proliferate.

The estimated increase in the local number of bat species due to shifts in their geographical ranges driven by climate change between 1901-1930 and 1990-2019. The zoomed-in area represents the likely spatial origin of the bat-borne ancestors of SARS-CoV-1 and 2. (Credit: Science of The Total Environment)

The region is also home to pangolins, mammals hunted in China for their meat and scales — which are thought to have healing properties, but this hasn't been proven. Pangolins could have been an intermediary species for the COVID-19 virus to jump from bats to humans. It's possible that a pangolin inadvertently consumed bat feces or saliva carrying the infection before being captured and sold at a wildlife market in Wuhan, China — from which the initial human outbreak is thought to stem.

The authors of the Science of the Total Environment paper declined to be interviewed by Discover. And some experts have expressed concerns about the study and the impacts of climate change on the current coronavirus pandemic, as the origin of COVID-19 is still being debated and not all South Asian bat species were fully assessed in the work. But there is widespread agreement in the scientific community that, in the future, climate change will be a growing driver of emerging infectious disease and pandemics.

Kate Jones, a professor of ecology and biodiversity at University College London, says that infectious diseases are emerging at increasing rates and are being driven by a number of factors — many of which are ultimately linked to human impacts on ecosystems.

Pathogen spillover risk involves a complex interplay of ecological hazards, exposure, and vulnerability. Human occupation of wildlife areas, population increases, and more mobility by way of air travel have created the perfect storm for future pandemics, according to Matthew Baylis, a veterinary epidemiologist at the University of Liverpool.

Baylis says it’s difficult to isolate climate change as a contributor, as it is driven both by human activity — such as burning fossil fuels and deforestation — and natural influences. However, he says the ecological damage that people cause is harder to reverse. This can have serious, far-reaching implications on the natural world.

“A volcano eruption might change the environment, but all the dust goes away after a few years,” says Baylis. “With human activity, the damage is more permanent, and the effects are global.”

For instance, deforestation — which includes logging, mining, and slash-and-burn agriculture — contributes to greenhouse gas emissions and rapidly pushes species (and the diseases they carry) out of their homes and potentially closer to where humans live.

Large-scale industrial livestock farms may also be a breeding ground for pathogens that could infect humans, particularly when their locations encroach on wildlife areas. With the 1999 Nipah virus outbreak in Malaysia, fruit bats passed on a viral infection that spread among a large pig farm built at the edge of a forest. Pig farmers likely picked up the virus from direct contact with sick pigs or when handling contaminated bodily tissue. The virus caused more than 100 deaths across Malaysia and Singapore and substantial economic impact as more than 1 million pigs were killed to help control the outbreak.

Avoiding the Next Pandemic

Preventing future disease outbreaks requires making big decisions on how we interact with the environment. Maintaining the intactness of landscapes and biodiversity is crucial as it reduces human-wildlife interaction while also being beneficial to other aspects of both human and planetary health, says Jones.

Baylis suggested encouraging countries to preserve their natural environment using that most compelling of incentives: money. In the European Union, monetary compensation is available for countries that work to preserve their forests. A similar, larger-scale model could incentivize countries like Brazil and Indonesia to reduce deforestation, explains Baylis.

A study published in Science estimated that prevention measures around deforestation, the wildlife trade, and farm practices would cost just 2 percent of the total economic toll that the COVID-19 pandemic has racked up worldwide, which has so far been pegged at $16 trillion, or approximately 90 percent of the annual gross domestic product of the U.S., according to October 2020 figures.

But restricting the reach of large, powerful industries — along with encouraging human behavioral changes — is no easy feat.

“The genie we created is not going back into the bottle easily,” Baylis says.

More From Discover
Technology
The Hidden Science Behind Video Games Like The Last of Us
Health
What New Variants Of COVID-19 Are Currently Circulating?
Health
Here's Why Coronavirus Cases Are Surging in China
Health
Scientists Say Corpses Can Carry and Spread COVID-19
Health
How COVID-19 Developed in 2022 and What to Know for the Coming Year
Health
When You Should Get the COVID-19 Booster After Infection
Recommendations From Our Store
My Science ShopDiscover STEM Kits
My Science ShopDiscover 2022 Calendar
My Science ShopStrange Science
My Science ShopElements Flashcards
Shop Now
Stay Curious
Join
Our List