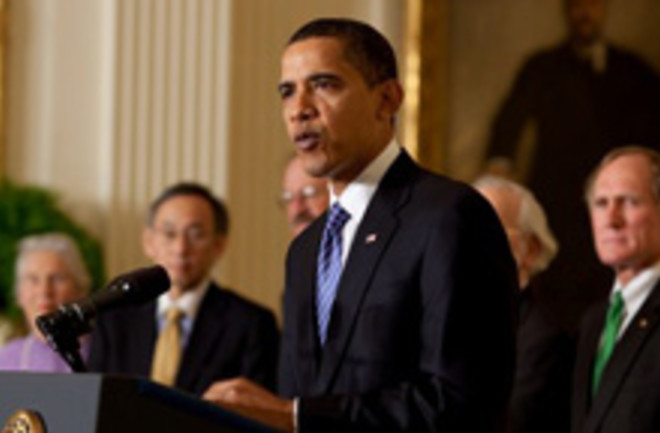 The Obama administration's new guidelines for research using human embryonic stem cells have staked out a compromise position, avoiding some controversial areas while still encouraging a large expansion of federally-funded research. The proposed regulations would allow research on stem cells taken from surplus embryos at fertility clinics, where in vitro fertilization generally creates

more embryos than will be implanted, and embryos not used are destroyed or kept frozen. The guidelines would allow couples to donate embryos for research, as long as they are not paid and are fully informed of their options [Washington Post].

However, the guidelines do not sanction the use of embryos created specifically for research purposes, an extra step that officials say does not yet have public or political support.

The draft guidelines also forbid funding for lines derived through parthenogenesis, a form of asexual reproduction in which an unfertilized egg is developed into an embryo. The International Stem Cell Corporation, a California company, has reported deriving stem cells from parthenotes [Nature News].

Finally, the guidelines prohibit the use of stem cells from human embryos created by cloning, although no such embryos are known to exist. The proposed regulations were issued by the National Institutes of Health (NIH) following President Obama's executive order on March 9, which overturned the restrictions

introduced by his predecessor, George Bush, which had limited federal funding to about 20 [embryonic stem] cell lines isolated before August 2001. Obama left the details to be worked out by officials at the NIH [New Scientist].

However, not everyone was satisfied with the compromise position.

"I am really, really startled," said Susan L. Solomon, chief executive of the private New York Stem Cell Foundation. "This seems to be a political calculus when what we want in this country is a scientific research calculus" [Washington Post].