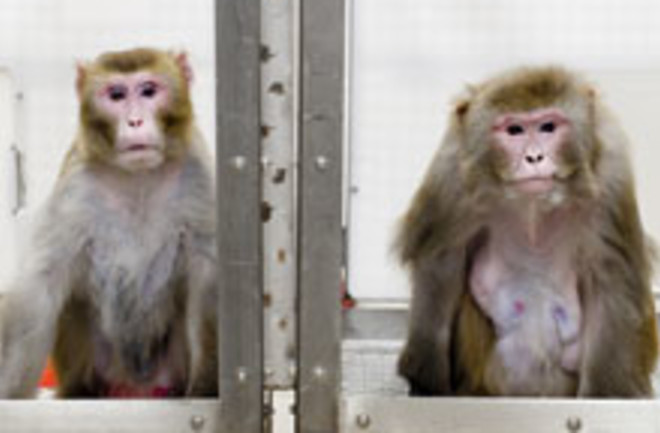 It's been a big week on the longevity front: First, scientists found that an immunosuppresant drug called rapamycin extended the lifespan of mice. Now, a 20-year-long study reported in the journal Science shows that a diet 30 percent lower in calories than normal decreased the incidence of age-related diseases in macaque monkeys as the animals got older. Half the monkeys were fed a low-calorie diet, and the other half a standard diet. All were closely monitored, with researchers regularly measuring their body composition, blood chemistry, endocrine function, and heart and brain function. When monkeys died, they were necropsied and the causes of death established

. Researchers found that monkeys on a calorie-restricted, nutrient-rich diet (on the left in photo) were three times less likely than monkeys on a full-calorie diet (on the right) to die from age-related diseases like cancer, diabetes, and heart disease. Scientists have hypothesized that calorie restriction triggers mechanisms that evolved to help organisms survive in times when food was scarce, but the exact process is still mysterious. The anti-aging benefits even extended to the monkeys' brains.

MRIs reveal less shrinking with age in areas important for decision-making and controlling movement in the brains of calorie-restricted animals [Science News].

This corroborates previous studies that found calorie restriction helps mice, dogs, fruit flies, and yeast age more slowly and can even help them live longer. But because macaques can live to the age of 40, scientists cannot yet ascertain whether a low-calorie diet actually extends lifespan in monkeys. Researchers speculate that further research will eventually show that humans, too, can benefit from a low-calorie diet. “Up until now, all the clear-cut evidence that caloric restriction slows aging has come from lower organisms,” said John Holloszy, ... who studies caloric restriction in people and was not involved in the current monkey study. “This is the first study to show that caloric restriction slows aging in a primate species. And of course, we’re primates, too. It’s a lot more relevant to humans than the mouse”

In fact, a person who switches from the typical nutrient-sparse, high-calorie American diet to one that is high in nutrients and low in calories may benefit more than the monkeys did. That's because even the macaques that ate a higher-calorie diet consumed plenty of nutrients. Still, a lifetime of deprivation may not be feasible, much less enjoyable, for most people (although it's estimated that a few thousand people already follow a calorie-restricted diet for its suspected anti-aging effects). Instead, scientists hope to deliver in a drug the anti-aging effects of a low-calorie diet, or of chemical compounds that seem to replicate the effects of a calorie-restricted diet.

Several teams are hoping to harness the age-defying benefits of red wine. GlaxoSmithKline last year spent $720 million to buy Sirtris Pharmaceuticals, which has developed a souped-up version of the red wine compound resveratrol that has been found to make mice live longer and stay healthier [Reuters].