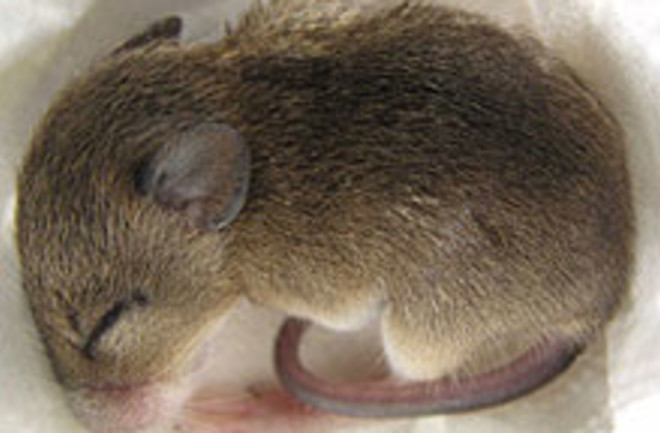 Laboratory mice who were given an immunosuppresant drug called rapamycin lived between 9 and 14 percent longer than mice who didn't take the drug, according to a study in Nature. The drug, which was developed from bacteria found in Easter Island's dirt,

. Even more remarkable, the mice weren't given the drug until late middle age, showing rapamycin had effects even when taken later in life. The drug is already used to suppress the immune systems of organ transplant patients, and it's undergoing clinical testing as a possible cancer treatment.

Rapamycin works by inhibiting the target of rapamycin (TOR) signaling pathway, which plays a role in the translating mRNA into proteins and inhibits processes that degrade cellular waste. The drug has been found to extend the life spans of yeast, fruit flies, and nematodes [The Scientist]

, but this is the first time it's been shown to help mammals live longer. The drug boosted the lifespans of mice that were 600 days old at the time of treatment,

the equivalent in age to a 60-year-old human. "That is very surprising to myself and to a lot of people," [said pathologist Matt] Kaeberlein. "And it's a very important result" [The Scientist].

However, it still isn't clear exactly how the TOR signaling pathway is involved in the aging process. Previously, researchers have focused on lengthening lifespan in lab mice through caloric restriction or genetic engineering. Although rapamycin's effects were not as drastic as those of a lifetime of caloric restriction, it trumped the effects of a calorically restricted diet begun later in life. And scientists hope that rapamycin may extend lifespan even more:

In ongoing studies, the researchers are testing different doses across a range of starting ages; an optimal combination may ultimately prove more potent than calorie restriction [Technology Review]. But humans shouldn't rush out and try to get their hands on the drug, scientists say. Unlike lab animals, we humans live in a pathogen-filled world, so taking an immunosuppressant like rapamycin in an attempt to prolong life isn't a good idea.

Researchers will now try to work backwards from these exciting results to find the specific mechanism by which rapamycin works. And while a 9 percent increase in lifespan may not sound like much, study coauthor David Harrison says it's

significant when compared to the effect of eradicating some of the most common age-related diseases in humans. "If you prevented all deaths from cancer and atherosclerosis," Harrison said, "it would be a little less than that" [The Scientist].

More From Discover
Mind
5 Natural Ways You Can Improve Your Memory
Health
Why Do Some People Live So Long?
Health
This Senolytic Antibody Drug Could Combat Aging, and the Diseases It Brings
Health
5 Activities That Prevent Cognitive Decline
Mind
Why Schizophrenia is Different for Women
Health
6 Brain Boosting Foods You Should Have on Your Plate
Recommendations From Our Store
My Science ShopDiscover STEM Kits
My Science ShopDiscover 2022 Calendar
My Science ShopStrange Science
My Science ShopElements Flashcards
Shop Now
Stay Curious
Join
Our List