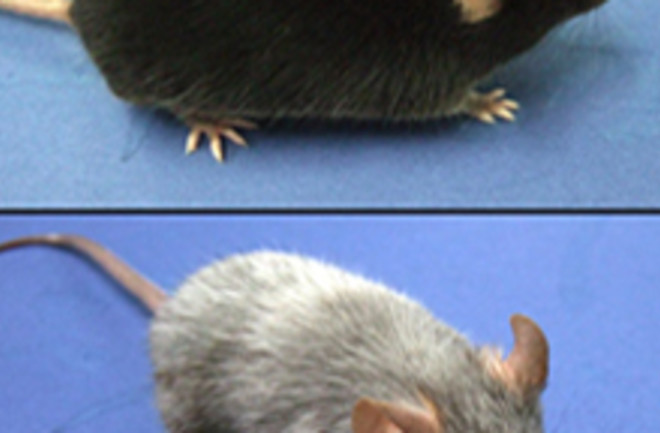 The notion that stress can cause hair to turn gray isn't entirely a myth: at least when it comes to genetic stress applied to laboratory mice. That's what researchers found when they damaged mice's DNA with ionizing radiation, according to a study published in the journal Cell. Scientists already knew that cells known as melanocyte stem cells were responsible for youthful hair color.

Each of these cells divides into two cells: One that replaces itself and another that differentiates into a pigment-producing daughter cell called a melanocyte, which imbues hair with its browns, reds and blacks. Earlier research has suggested that the depletion of these stem cells was to blame for grayness. But how exactly these stem cells disappeared was mysterious. With no more stem cells around to produce melanocytes, hair turns gray [Science News].

When the researchers inundated the mice with radiation that damaged the animals' DNA, the mice's fur turned from brown to gray (see photo). The researchers found that the damage caused the stem cells to mature, so that

the stem cells of the irradiated mice stopped copying themselves [Bloomberg].

Scientists say that this effect may be due a protective mechanism in the body. Maturing melanocyte stem cells

may be a way of preventing cells whose DNA has been damaged by toxins from becoming cancerous.... “Graying may actually be a safety mechanism, that’s a cool twist” [Bloomberg]

, comments dermatology researcher David Fisher, who wasn't involved in the current research. The results might help explain why people with the rare neurodegenerative disorder known as Ataxia telangiectasia have gray hair at an early age. The syndrome is caused by a mutation in a gene called ATM.

However, the new study does not

support the still-unproven common claim that emotional stress causes graying--at least not yet, says Fisher. “With this mechanistic insight,” he notes, “we might finally be able to look at questions like that one” [ScienceNOW Daily News].