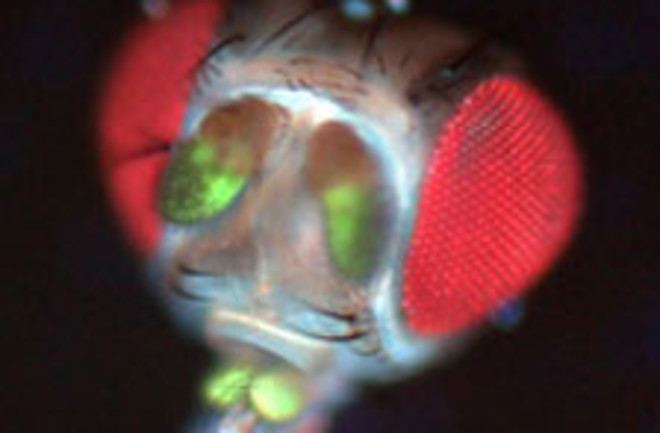 In today's edition of far-out science, researchers have found evidence that the wafting aroma of food has an effect on an organism's lifespan--and they've demonstrated that interfering with a fruit fly's sense of smell causes it to live a longer, healthier life. While there's no guarantee that the trick would work for humans, optimistic researchers

suggest that certain odors—or drugs that block us from sensing them—might one day help prevent disease and extend lives [ScienceNOW].

In the past decade, scientists have established a clear connection between extremely low-calorie diets and extended lifespans; studies have demonstrated that yeast, fruit flies, mice, and monkeys on these diets live longer than their peers. While the exact mechanism at work isn't yet clear, researchers suspect that a near-starvation diet causes an organism's metabolism to slow down, and triggers other changes that evolved to help organisms survive in times when food was scarce. Now scientists say it may not be just what a creature eats, but also what it smells that has an effect on how long it lives. In one 2007 study, molecular biologist Scott Pletcher and his colleagues found that completely eliminating fruit flies' sense of smell caused them to live nearly 20 percent longer than normal flies. They also found that wafting the smell of yeast, a tasty treat for fruit flies, towards flies that were on a low-cal, live-extending diet hastened the death of those flies. This led the scientist to hypothesize that specific odors might be influencing the flies’ lifespans. Luckily, other scientists had identified a receptor in a group of neurons that enable fruit flies to smell carbon dioxide, which signals the presence of a good meal of tasty yeast

. So, Pletcher and his team set out to find if the CO2 had anything to do with the duration of the flies' lives. For the new study published in PloS Biology, Pletcher eliminated the fruit flies’ ability to smell carbon dioxide, while keeping the rest of the olfactory system intact. Even on a standard, full-calorie diet, the flies that couldn't detect CO2 lived up to 30 percent longer than other flies. The researchers suggest that the absense of CO2 may have indicated to the altered flies that food was scarce in the environment, prompting them to snap into survival mode. Oddly, however, the life-extending effect was only seen in female flies--male flies gained no such benefit. The smell-deprived female flies also seemed healthier and stronger by several measures: They stored extra fat, produced more offspring, and proved to be more resistant to oxidative stress than normal flies. Pletcher isn’t sure how the inability to smell CO2 extended the females’ lifespans, but he says the findings open up fascinating new areas for studies of human aging. He suggests that there might be certain smells or drugs that would block certain odors, and which could give humans a bit more time before we shuffle off our mortal coils. Matt Karberlein, an aging expert who wasn't involved in Pletcher's research, was cautiously optimistic about that possibility, saying:

“We definitely undergo physiological changes in response to smelling food – I’m getting hungry just thinking about it – so I think it’s possible” [New Scientist].