People diet for many reasons - to fit into clothes, to look more attractive, or for the sake of their health. But to improve their memory? It's an interesting idea, and one that's been given fresh support by Veronica Witte and colleagues from the University of Munster in Germany.

Witte found that elderly people who slash the calories in their diet by 30% were better able to remember lists of words than people who stuck to their normal routine. It's the first experiment to show that cutting calories can improve human memory at an age when declining memory is par for the course.

The benefits of low-calorie diets have been extensively studied in animals, ever since Clive McCay discovered that "caloric restriction" doubled the lifespan of rats, over 70 years ago. Many studies have found that such diets could help to slow the brain's eventual decline and protect its neurons from the ravages of ageing. But until now, no experiments had confirmed that the same benefits are relevant to the human brain.

Witte did so by recruiting fifty healthy people, aged 52- 68 and asking twenty of them to cut their calorie intake by 30%. Experienced dieticians gave them advice on following their new diet and were just a phone call away for the duration of the experiment. A second group of 20 volunteers were asked to eat more unsaturated fatty acids, such as olive and fish oils; studies have also found that these could improve mental performance in animals and reduce the risk of Alzheimer's disease in humans. The 10 remaining volunteers carried on with business as usual.

The diets lasted for three months. At the start, middle and end of the period, the recruits had to fill in detailed food diaries, listing everything they ate or drank for a week. Witte measured their height, weight and other physical traits, and took blood samples from them. She also tested their memories by asking them to learn a list of 15 words and repeat as many as they could after half an hour. 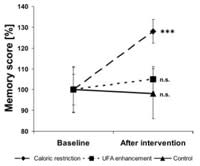 While the unsaturated fatty acid diet and the normal one did nothing of note, the low-calorie regime certainly did. Witte found that this group remembered more words and made fewer mistakes at the end of the three months than they did before the experiment started.

Witte argues that it was the drop in calories that lay behind these changes. After all, the low-calorie group certainly followed their instructions. Over the experiment's duration, they lost weight and their BMIs went down by about a unit on average. When asked about their experiences afterwards, most said that they had "definitely" or "predominantly" stuck to their regime and none of them claimed to have been more physically active.

Of course, it's possible that the low-calorie group were actually benefiting from the interaction they had with the dieticians, rather than anything to do with their diets. Just recently, I blogged about a study which showed that richer environments could potentially be used to restore lost memories. However, Witte thinks that this explanation is a very unlikely one, for the volunteers who ate more unsaturated fatty acids also had friendly dieticians to talk to, and their memories did not get better.

So what was behind their superior recollection? Their blood samples provide a clue - after the three months, the volunteers had lower levels of the hormone insulin circulating round their bodies. In fact, those who showed the greatest improvements in memory also had the largest falls in insulin - a link that was particularly pronounced in those who stuck most closely to their dietary instructions.

Witte suggests that the falling insulin levels could help to explain the improvements in memory. Insulin has a number of roles to play throughout the body. In the brain, it's involved in signalling pathways that protect neurons and play a role in securing long-term memories.

But you can get too much of a good thing - an excess of insulin can lead to resistance, where far more of the hormone is needed to provoke the same response. This "insulin resistance" weakens systems in the body that use insulin as a signalling molecule, including those involved in memory and learning. So low-calorie diets could improve memory by lowering insulin levels, sensitising the body to this crucial hormone, improving insulin signalling in the brain and increasing its neurons' chances of survival.

The same chain of events has been suggested by animal studies too and while it's a good explanation, it's probably not the only one. For example, Witte also found that the low-calorie volunteers had lower levels of C-reactive protein - a protein produced by fat cells and linked to inflammation. How inflammation could be linked to poorer memory is unclear, but some studies have connectedlow levels of C-reactive protein to strong scores in word-learning tasks. The details of this link need to be exposed by future studies.

For the moment, Witte's work suggests a promising and relatively simple way of improving memory in old age. It will, of course, be important to repeat the experiment with a much larger number of people. And it will be interesting to see whether a low-calorie diet has any other mental benefits, beyond the ability to commit words to memory.

As a final note, I gave my wife a quick summary of this research and she said, "Doesn't this mean that people who eat less chocolate will be better able to remember not eating any chocolate? That's sad."