In Worms, a New Theory on Aging 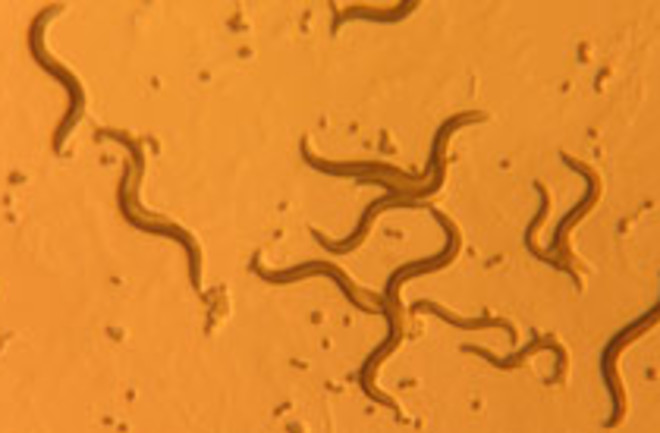 A genetic study of worms has challenged the prevailing theory of aging, which holds that organisms eventually break down and die as a result of wear-and tear on their bodies. Researchers have found that certain genes in the worms are genetically programmed to stop functioning as the worm ages; while there's no guarantee that a similar process takes place in humans, the results nevertheless give

hope that science eventually may find a way to stop or reverse the aging process [HealthDay News].

Researchers have thought that aging is

due to damage inflicted on our cellular DNA (genetic material) by factors such as smoking, disease, the sun's ultraviolet rays and chemically reactive molecules called free radicals, which are produced when our cells make energy. [This study] suggests instead that a combination of factors is at play—that in addition to [environmental factors], there are also certain genes that may carry instructions to start the aging process [Scientific American].

In the study, which was published in the journal Cell [subscription required], researchers looked at genes that behaved differently in young and old worms.

They found 1254 genes that had different expression levels between the two groups. Almost all of these genes were developmental genes, necessary for proper intestinal and skin development in young worms [The Scientist].

They also found three genetic switches (called transcription factors) that controlled the expression of those developmental genes, and that turned them off in older worms. The tiny C. elegans nematode worms typically live for only two weeks, but when researchers prevented those genetic switches from turning off the genes the worms lived for up to a week longer.

Marc Tatar, from Brown University in Rhode Island said: "The message of this research is that ageing can be slowed and managed by manipulating signalling circuits within cells" [Telegraph].

More From Discover
Mind
What Happens When Scientists Put a Human Intelligence Gene Into a Monkey?
Planet Earth
1 in 200 Men are Direct Descendants of Genghis Khan
Planet Earth
The Migration of Ancient Indigenous People in South America is a Complex Tale
Planet Earth
Will Woolly Mammoths Ever Make a Comeback?
The Sciences
Why It Takes Decades To Breed New Apple Varieties
Health
There's a New Group of Blood Types — Here's Why it’s Important
Recommendations From Our Store
My Science ShopDiscover STEM Kits
My Science ShopDiscover 2022 Calendar
My Science ShopStrange Science
My Science ShopElements Flashcards
Shop Now
Stay Curious
Join
Our List