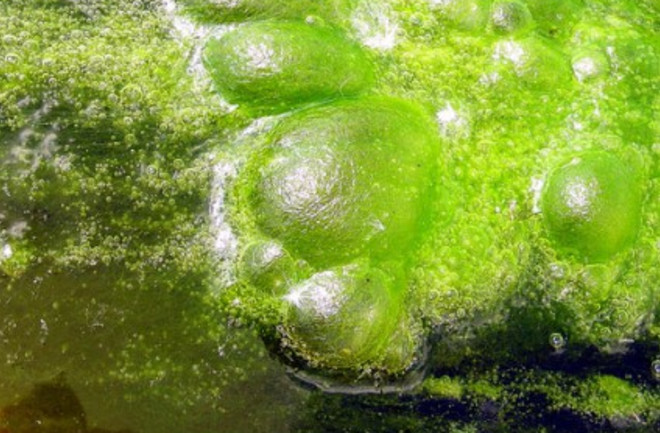 When algae is discussed as an alternative source of biofuel, it's often in tones of breathless excitement; many green tech boosters believe that the slimy goo can be turned into fuel superior to that made from corn, canola, or switch grass. You don't need vast tracts of land to cultivate algae for biofuel, the thinking goes, all you need is the right strain of algae, water, sunlight, and carbon dioxide. Even Exxon and Dow Chemical recently joined the biofuel brigade, and are now investing millions in algae operations. But a new study suggests that while algae might produce good fuel, the environmental costs involved in the production would be heavy. A life-cycle assessment published in the journal Environmental Science and Technology argues that algae production consumes more water and energy than other biofuel sources like corn, canola, and switch grass, and also has higher greenhouse gas emissions. While the study's results are sobering, they're also being met with harsh criticism from alage-based biofuel companies and their trade group, the

The culprit, the researchers say, is fertilizer. Growing algae in open ponds is akin to producing them in a shallow swimming pool, [lead researcher Andres] Clarens said, so all of the nutrients -- nitrogen and phosphorus -- needed to keep them alive and boost their production come from outside sources

The researchers point out that corn can draw at least some of its nutrients naturally from the soil, and that process can be amplified by rotating crops, whereas algae production draws all of its fertilizer from external sources. Since the fertilizers dumped into the algae pools usually come from petroleum-based feedstocks, the cultivation process has a large carbon footprint. However, Clarens offers one solution to the fertilizer problem: The algae ponds could be placed near wastewater sources, which the algae could use for nutrients.There's another issue, according to the study. Algae use sunlight and water to convert carbon dioxide into materials that can be easily converted into fuel

But researchers say that even that CO2 presently comes from external petroleum-based sources, since we don't yet have a cheap way to trap and transport the CO2 emissions from power plants and factories.

The research, unsurprisingly, has drawn the ire of biofuel companies who allege the researchers used old and outdated data for the study. In response, Andres Clarens the lead author of the study said he used the most recent data that he could, which was about 10 years old. Algae biofuel companies keep their research a closely guarded secret, he said. He invited companies to share any more recent and relevant data they had with him

There is now speculation that Clarens may do a follow-up study if the biofuel companies provide him with more recent data.