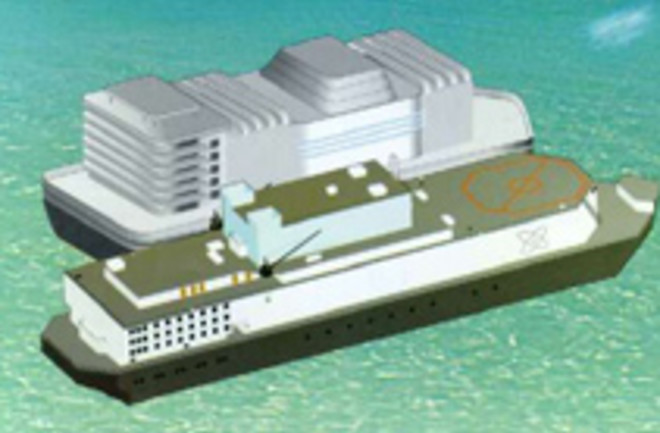 New oil and gas drilling in the Arctic ocean off the coast of Siberia could be powered by floating nuclear power plants, according to Russia's nuclear energy agency, and off-shore plants may also be built to provide energy for remote towns and military outposts. The Russian nuclear agency has reportedly signed a deal to build four plants for towns in the far northern Siberian Republic of Yakutiya, and is currently constructing its first floating nuclear plant for a defense facility by the White Sea. But environmental groups are most alarmed at the prospect of using the portable plants to power oil and gas drilling.

The 70-megawatt plants, each of which would consist of two reactors on board giant steel platforms, would provide power to Gazprom, the oil firm which is also Russia's biggest company. It would allow Gazprom to power drills needed to exploit some of the remotest oil and gas fields in the world in the Barents and Kara seas. The self-propelled vessels would store their own waste and fuel and would need to be serviced only once every 12 to 14 years [The Guardian].

The Norwegian watchdog group Bellona, which has been monitoring Russia's nuclear industry, says that floating nuclear plants would pose an unacceptable threat to the Arctic.

"It is highly risky. The risk of a nuclear accident on a floating power plant is increased. The plants' potential impact on the fragile Arctic environment through emissions of radioactivity and heat remains a major concern. If there is an accident, it would be impossible to handle," said Igor Kudrik, a spokesman [The Guardian].

However, Russian officials point to a range of benefits that the miniature nuclear plants can provide, and

argue that their long experience of operating nuclear-powered ships shows that the technology is safe.... Experts say that it can also operate as a desalination plant, producing up to 240,000 cubic metres of fresh water a day from the sea [Times Online].

As global warming melts the sea-ice in the Arctic Ocean, a vast store of mineral wealth becomes more available for extraction: the United States Geological Survey has estimated that the polar region contains one-fifth of the world’s undiscovered oil and natural gas resources. However, environmentalists can take some comfort in the real possibility that the floating nuclear plants won't get the financing to be completed. Bellona has reported that construction of the first floating nuclear plant was delayed when it was moved to a new shipyard for completion, and suggests that the worldwide economic slowdown has derailed Russia's ambitious plans for a nuclear renaissance. Related Content: 80beats: Could Mini-Nuclear Reactors Power Developing World Villages? 80beats: The Arctic Holds 90 Billion Barrels of Oil, Geologists Say DISCOVER: Can Giant Robots Successfully Mine the Mile-Deep Seafloor?  DISCOVER: Nations Stake Their Claims to a Melting Arctic DISCOVER: Arctic Land Grabs Could Cause an Eco-Disaster Image: Rosatom