Arctic Land Grabs Could Cause Eco-Disaster

After nations carve up the fast-melting region, will there be anything left? 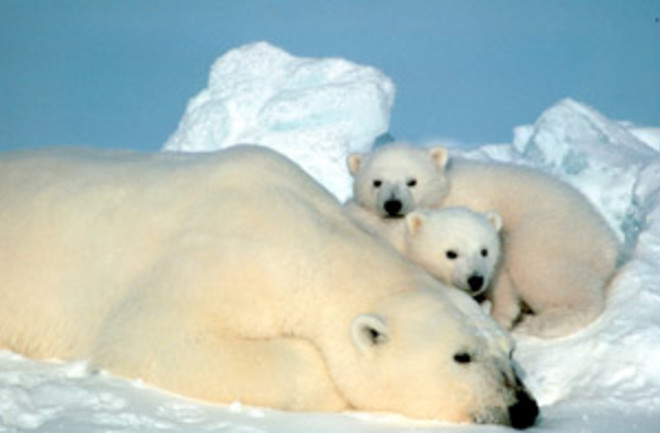 Mariners have been dreaming about using the Northwest Passage above Canada and the Northern Sea route above Siberia for centuries. The two waterways represent a seductive shortcut between Europe and Asia; the current route from Europe involves looping all the way down to the Panama Canal and back up the U.S. West Coast, a distance of about 12,000 miles. The Northwest Passage route is about 4,000 miles shorter, which could save shipping companies millions of dollars on fuel.

And ships won't be entering the Arctic just for quick transits through the Northwest Passage. The number one draw to an ice-diminished Arctic is the cache of natural resources like oil and natural gas that are thought to be buried under the ocean floor. The U.S. Geological Survey estimates the Arctic contains up to a quarter of the world's undiscovered oil and natural gas. Once covered by thick sea ice, these treasures could soon become accessible, and Arctic nations like the U.S., Russia, and Denmark want the profits.

Environmental groups are not happy about the prospect of increased shipping in the Arctic. Many worry that expanding traffic over the next few years is all too likely to cause an environmentally disastrous accident because the ice won't be completely cleared for decades—it will have cleared just enough that inexperienced mariners will recklessly try to push through. "Freighters of all sorts will be coming through to save some cost on fuel," says Joseph Handley, premier of Canada's Northwest Territories, which border the Arctic Ocean. "They’ll come through and there will be accidents."

If the worst case does come to pass and there's a large oil or chemical spill in the Arctic, its consequences could be worse than in other areas. The evaporation process is much slower in high latitudes because the water is so cold; breaking down spilled oil would take many decades, says Peter Ewins, director of species conservation for World Wildlife Fund-Canada. In addition, the region is so far removed from population and maritime centers that getting cleanup supplies to a spill site would be much harder, if not impossible. After the Exxon Valdez oil spill in Alaska, the U.S. Coast Guard was near enough that a cleanup effort could start immediately. But if a colossal spill like the Valdez happened much farther north, it could devastate the area. "If you had to clean up a spill in the high Arctic, I don’t know how you’d do it," Handley says.

The Arctic environment is especially vulnerable to climate change and a large share of the relatively few native species, including polar bears and caribou, are struggling for survival. Increased shipping could send these species over the edge, say ecologists. For example, the Dolphin-Union caribou, which live in the Canadian archipelago in the middle of the Northwest Passage, rely on ice bridges to get into mainland Canada for food in the winter. Ships passing through have already cut up these bridges, Ewins says. This also affects the Inuit community in the northern islands because they rely on the caribou for food. Passing ships have interfered with the Inuit more directly: On more than one occasion, ships barging through the ice have left hunters stranded on newly severed icebergs, according to Handley.

Growing numbers of ships in the Arctic could also exacerbate the problem of invasive species, foreign plants and animals that enter and often take over ecosystems. Bacteria and small organisms like crabs and mussels brought in on ships coming from warmer oceans could spread disease and compete with native species for resources. Invasive species are entering the region with or without shipping, says Ted Scambos of the National Snow and Ice Data Center in Colorado; warming of the Arctic Ocean's surface temperatures has already increased mixing with foreign waters and all the microbes they contain. Increased shipping could further accelerate the process, making the situation much worse and harder to repair.

Perhaps even more worrisome, there's currently no plan in place to protect the Arctic from the effects of growing maritime traffic. Part of the problem is that no one can agree on which waters belong to whom. Eight countries—Russia, Canada, the United States, Norway, Finland, Iceland, Sweden, and Denmark, through its territory, Greenland—have laid claim to Arctic territory and waters. Each nation is entitled to waters within 200 nautical miles of its continental shelves, according to the U.N.'s Law of the Sea, but over the years confusion has developed as to what constitutes a continental shelf. When a team of Russian geologists claimed part of the North Pole's seabed earlier this month, they argued the seabed is part of a large underwater mountain range that connects to Russia. Should the U.N. accept their claim—an unlikely possibility, given that they've turned down similar claims from the Russian Bear in the past—Russia would be entitled to thousands of miles of the Arctic Ocean and 45 percent of the area's resources, according to some sources. Canadian politicians, meanwhile, say that other countries should be required to get Canadian permission before entering the Northwest Passage because much of the waters weave in and out of Canada's northern islands. The United States and Europe have long ignored Canada's professed sovereignty in this regard, claiming the fast-liquidating Northwest Passage is international and should be unrestricted.

With no clear resolution as to who makes the rules in the Arctic, few rules have been adopted. Some international organizations are working on regulation programs in the Arctic, like the U.N.'s Arctic Council, but there is still no plan for how to enforce proposed rules. As countries jockey for land and rights, environmental concerns have been largely ignored.

All the Arctic nations are supposedly committed to protecting the Arctic. Back in 1993, they all signed the Nuuk Declaration, in which they promised to consider the environmental effects of all proposed activities in the region. Still, the economic incentive in this case may be too great for countries to put the environment first, and unlike Antarctica, which the U.N. deemed noncommercial, international territory, the Arctic might never attain protected status—its potential for profit is just too high. "There is a whole series of reasons why people want to venture into the Arctic more and more, so the number of ships will only keep increasing," says Ewins of the WWF.

Before long, the concept of an ice-free Arctic won't be a possible future—it'll be present-tense reality, and allied countries like the United States and Canada may find themselves fighting over territory that was quite recently considered a useless wasteland. "This may all be playing out within the next few years, rather than decades from now as had been thought," says Scambos from the National Snow and Ice Data Center. "Things are changing fast."