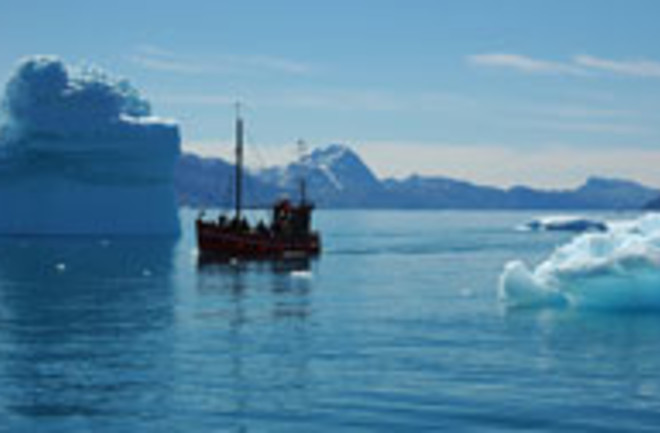 There's oil in that thar Arctic, and lots of it; that's what the U.S. Geological Survey has to say after conducting the most comprehensive survey of the Arctic's energy resources to date. The USGS says the polar region contains one-fifth of the world's undiscovered oil and natural gas resources, which amounts to 90 billion barrels of oil and 1,670 trillion cubic feet of natural gas. The report is bound to fuel calls for oil companies to increase drilling in the Arctic Ocean, and is also guaranteed to spark protests from environmentalists who advocate a shift away from fossil fuels.

The oil is considered "technically recoverable" using existing technology, but the survey did not consider the cost of overcoming obstacles to drilling, such as permanent sea ice or deep ocean waters.... Oil companies have already spent billions to secure leases to explore some of the uncharted waters [AP].

Ironically, much of the new exploration is being made possible by global warming caused by the burning of fossil fuels; melting ice caps have opened up prospects that were once considered too harsh to explore [The New York Times].

The survey puts to rest the notion that the Arctic nations, namely the United States, Canada, Russia, Norway, and Denmark, will be forced to compete for drilling rights in the area around the North Pole, which is the subject of a multi-nation territorial dispute. Lead geologist Donald Gautier explains:

“Most of the resources are on the continental shelf in areas already under territorial claims” [The New York Times].

The two most promising areas are a region off the coast of Alaska that is estimated to hold 30 billion barrels of oil, and a zone in Russian waters that contain vast fields of natural gas.

Scientists cautioned that even in the Arctic reserves are immediately opened to drilling, they won't solve the country's energy problems any time soon;

it will take decades to develop the Arctic's hard-to-get-at oil and natural gas. "It will not ratchet up global production like a new Saudi Arabia," said Donald Lee Gautier.... "These are additions that will come over time" [The Wall Street Journal].