#5: Nations Stake Their Claims to a Melting Arctic

Undiscovered oil and gas reserves below the ice set off a polar gold rush. 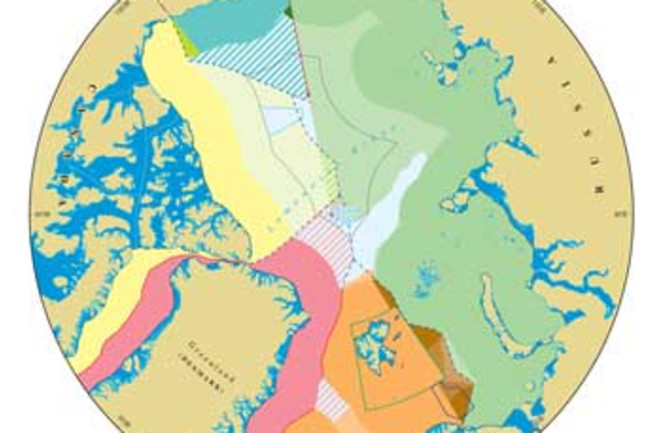 The ice lid on the Arctic Ocean continues to melt. At summer’s end, sea-ice coverage was one-third smaller than the average from 1979 to 2000. With the loss of ice, the seabed’s natural resources become potentially more obtainable and its bordering nations more interested. Martin Pratt, director of research at the International Boundaries Research Unit at Durham University in England, has already seen evidence of that interest. This year, he and his team produced an online map of the Arctic maritime jurisdictions and boundaries that in a mere three days had been downloaded more than 42,000 times.

The map has patches of color demarcating areas of the Arctic Ocean and seabed to which each of the five countries bordering the ocean—the United States, Canada, Russia, Denmark (Greenland), and Norway—might claim title. Bright, solid colors represent seafloor over which each country already has jurisdiction because it lies within its 200-nautical-mile offshore limit. Striped areas represent the maximum stretch of seafloor each is likely to claim as additional territory under the United Nations Convention on the Law of the Sea.

In July the U.S. Geological Survey reported that the area north of the Arctic Circle probably contains 13 percent of the world’s “undiscovered” oil, some 90 billion barrels, and almost a third of its undiscovered natural gas. The prospect of petroleum stores under the sea had already set off an Arctic gold rush. In August 2007 a Mir-1 submersible planted a small titanium Russian flag in the seabed at the North Pole. Canadian prime minister Stephen Harper responded by adding 900 armed rangers to a contingent of Inuit patrols. The Danes got involved too, sending out an expedition to confirm that an underwater ridge is connected to Greenland.

Claims to the Arctic Ocean are governed by the Law of the Sea treaty. To extend its maritime boundaries, a nation must provide scientific evidence of a “natural prolongation” of its continental shelf, usually by locating the foot of the region that drops off toward abyssal seafloor. The circumpolar countries have all mounted scientific expeditions to get that and other evidence of prolongation (sediment thickness, rock type). Each country has 10 years after ratifying the Law of the Sea to present its claims to a commission of experts. Where valid claims overlap, the countries themselves are to settle the boundary dispute. In 2001 Russia reportedly laid claim to a large swath of the Arctic; the commission returned the submission, asking for more data. The Russians are still working on the revision.

The United States has not yet affirmed the Law of the Sea, but scientists are not waiting. Using multibeam sonar, a recent expedition found that the foot of the slope north of Alaska lies much farther out than expected, potentially entitling the United States to new resource rights over hundreds of square miles of seabed.

Although oil and gas deposits generally lie within the existing 200-mile limits, Christian Marcussen, a Danish geophysicist, senses that mapping the seafloor farther out is going to be worth it. “Brazil is finding oil in more than 6,500 feet of water,” he says. “Things change.”