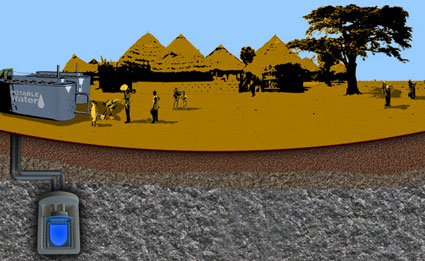 It's a device that could change energy options around the planet: A company called Hyperion Power Generation claims that its miniature nuclear reactors could power anything from water purifiers in developing world villages to oil extraction sites in the remote Arctic tundra to army outposts in the desert. One reactor, which would cost about $25 million, would produce 25 megawatts of energy,

enough to provide electricity for 20,000 average American-sized homes or a major industrial project. Daisy-chained, these micro-reactors, each one about twice the size of an average man, can supply enough electricity to power an entire small city or suburb [The Cutting Edge News].

The company says that its nuclear system is safe and clean, as it produces no greenhouse gases, and claims the reactors will be ready for mass production in five years. Hyperion's chief executive, John Deal, says the company already has

more than 100 firm orders, largely from the oil and electricity industries, but says the company is also targeting developing countries and isolated communities. "It's leapfrog technology," he said.... The first confirmed order came from TES, a Czech infrastructure company specialising in water plants and power plants. "They ordered six units and optioned a further 12. We are very sure of their capability to purchase," said Deal. The first one, he said, would be installed in Romania. "We now have a six-year waiting list. We are in talks with developers in the Cayman Islands, Panama and the Bahamas" [The Guardian].

Hyperion's nuclear reactors are about the size of a garden shed, and could be delivered by truck. To defuse safety concerns, the factory-sealed units will be buried underground, and will use a weak form of nuclear fuel that the company says could only be enriched into weapons-grade material by a nation with the most sophisticated nuclear technology. The system, which Hyperion refers to as a "big battery," would need to be refueled every five to ten years, a process the company says it would deal with at its factory. The company has competition in the brand new mini-reactor industry:

Toshiba is reportedly working on a small-scale design for Galena, Alaska. NuScale Power, a startup spawned in the nuclear engineering department at Oregon State, was the first U.S. company to submit plans to the Nuclear Regulatory Commission, which regulates all domestic nuclear power plants [Investor's Business Daily].