Last Saturday, on the United Nation’s International Day for Biodiversity, an open letter from hundreds of British organisations warned of the importance of our rapidly eroding biodiversity, while a UN report discussed the economic consequences of this erosion. The general principle of conserving biodiversity has inarguable value but there’s much more debate about how best to do it. Take national parks and reserves –these protected areas save wildlife but they stop local people from using the land for farming and from using its resources. The argument that such limitations prioritise “cuddly animals” over “poor people” is particularly sharp in developing countries, where rural communities are said to bear the costs of protected areas without reaping their benefits. But a new study in Costa Rica and Thailand says that such objections are unfounded. By actually comparing similar communities on a small scale, Kwaw Andam from Washington’s International Food Policy Research Institute has shown that protected areas actually help to alleviate poverty. In 2003, the so-called Durban Accord from the World Congress on Protected Areas urged commitments to “protected area management that strives to reduce, and in no way exacerbates, poverty”. Well and easily said, but studying the link between poverty and protection is quite difficult. The two seem to go hand in hand, but protected areas are often set up in far-flung areas where poverty if rife. How can you actually tell if they worsen the situation? Andam did it by focusing on protected areas in Costa Rica and Thailand. These developing nations have very different cultures and histories but they are both hotspots of biodiversity that set up protected areas a long time ago. And importantly, they both have good sources national statistics. Using these data, Andam’s team compared communities where at least 10% of the land had been protected with those where less than 1% had been. This difference aside, they compared like for like, matching the various communities in terms of their forest cover, their access to transportation, the productivity of their land, and how poor they were before protected zones were set up. The analysis was very detailed, zooming in at a fine regional level and taking data about poverty from household surveys. The team also focused on protected areas that had been around for 15 years or more, to get a sense of their long-term impact. On the surface, the link between poverty and protection seemed clear. As with many other countries, the Costa Rican and Thai communities with high levels of protected biodiversity were much poorer than those with little protection. But these areas were already among the poorest parts of the two countries before the protected zones were set up. Taking this into account, Andam’s matched comparisons revealed that protected areas don’t exacerbate the economic shortfalls of local communities. If anything, they actually make things better. Put it another way, if the protected areas hadn’t been set up, the local people would probably be even worse off than they actually are. 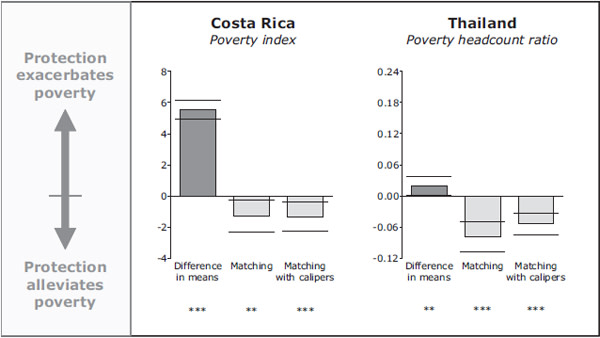 Could there be other explanations? Certainly, but Andam systematically ruled them out. Andam showed that the genesis of the protected areas didn’t affect the population growth of the relevant areas, which shows that poor people weren’t being pushed out into neighbouring regions. Andam also considered the possibility that the costs of protected areas were spilling over into neighbouring communities, affecting a far wider catchment area than he suspected. But when he left out control regions that were within 10km of a protected area and re-ran his analysis, he got the same result. This is an important study, which provides some much needed evidence in the area of conservation policy. It’s also very encouraging. Previously, Andam has shown that the networks of protected areas have slowed the pace of deforestation and his latest results show that this success hasn’t come at the cost of local development. If anything, things have improved for local people as a result. It’s not clear how, but it could be that protected areas bring opportunities from business and investments, promote tourism, or improve local infrastructure. However, Andam is rightly cautious. He notes that his results present an average trend over several decades. In the short term, things may get worse before they get better, and not all districts would benefit equally. Poverty is also only one aspect of a community’s wellbeing and there’s no data on their ability to maintain their cultural traditions, or to feel in control of their fates. And, obviously, Costa Rica and Thailand are but two countries. Both have enjoyed a lot of investment in their protected areas and in eco-tourism so the same trends may not apply in other parts of the world. (Andam also writes that they had “relatively stable political systems” but the current Thai situation probably doesn’t support that statement!) Andam calls for other researchers to do a similar analysis in other parts of the world to get a global picture of the impact of protected areas. For now, we have a restricted view of this picture, albeit a positive one. As he writes, “Our results... suggest that protecting biodiversity can contribute to both environmental sustainability and poverty alleviation, two of the United Nations Millennium Development Goals.” Reference: PNAS http://dx.doi.org/10.1073/pnas.0914177107