In 2004, the Australian Government turned a third of the Great Barrier Reef into the largest network of no-fishing zones in the world. All fishing was banned in an area of sea just smaller than England. It was a bold and controversial political move - jobs and livelihoods, it was said, were on the line. But the plan went ahead and in just a few years, there are signs that it's working. One of the reef's most heavily fished species - the coral trout- is enjoying a dramatic comeback, thanks to this most ambitious of marine conservation projects. 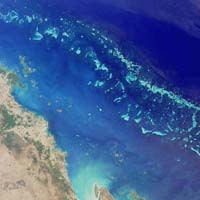 The vast expanse of the Great Barrier Reef is the largest living colony of animals on the planet and home to thousands of species. It has been part of a marine park since the 1970s but there were concerns that it wasn't adequately protected. After all, most of the area was still open to destructive trawling vessels.

Due to mounting concerns, the Government launched a massive consultation involving scientists, policy-makers and local communities. The result was to turn 33% of the park into a network of no-take marine reserves, a massive increase from the tiny 5% that had previously been protected. The goal is simple - to prevent the continuing degradation of one of the world's most important marine ecosystems, and to encourage diverse range of species to return to habitats in decline.

The consultation also identified 70 unique habitats or "bioregions" within the Reef's waters, each with its own unique physical and environment traits and its own cadre of species. From reefs to grass beds to sponge gardens, at least a fifth of the area within each of these zones was protected.

After just a few years, the initiative is already starting to work. Garry Russ and colleagues from James Cook University and the Australian Institute of Marine Science found that one fish in particular - the coral trout - has enjoyed a tremendous comeback since the reserves were set up. The coral trout is a visually striking fish, whose red body is covered in blue spots. Unfortunately, it's also tasty and commands good prices both locally and internationally, which has made it one of the major targets for all sectors of the fishing industry.

Before the no-take reserves were set up, Russ's team did a census of marine life in 46 sites that would fall within their boundaries and 46 sites that would lie beyond them. The sites encompassed both reefs that sat close to three groups of islands and those that lay in five areas further out to sea. About 18-24 months after the fishing bans were put in place, they repeated their counts and found that the cod numbers had significantly increased.

Near the Palm and Whitsunday Islands and in four open offshore reefs, their numbers shot up by about 55-65% in the no-take reserves, but stayed the same in areas open to fishing. Near the Keppel Islands, the trout numbers actually fell but that was due to an extreme case of coral bleaching. And even here, trout numbers went down by a lesser extent in areas where fishing was banned.

The team also found that coral trout numbers didn't decline in areas outside the protected zones, which refutes claims made at the time that the no-take reserves would just displace overfishing to other parts of the reef. When the reserves were introduced, the Government also brought in a catch quota to prevent exactly that from happening. This measure too, it seems, has worked.

The consistent nature of the coral trout's population rise is extremely encouraging, especially since it's happening over 1,700 km of ocean. For marine conservation, a positive response like this at such a large scale is completely unheard of. It's the best evidence yet that no-take marine reserves are a good idea. To date, a mere 0.01% of the world's oceans are protected as no-take marine reserves, and Russ's study makes a compelling case for increasing this proportion.

It may seem premature to start popping corks based on the rebound of a single species, but coral trout are very important. They are top predators and as such, have tremendous pull on the Reef's biodiversity. I've blogged before about how hunting high-level predators like sharks inadvertently harms fish at the bottom of the food chain by allowing mid-level predators to flourish unchecked.

Russ predicts that over time, the benefits reaped by the no-take zones will extend to other areas where fishing is allowed. Fish larvae don't stay in the same place and there's every chance that they will start to emigrate to unprotected areas and boost the populations there too. That's good for both fish and fisheries and it would hopefully mean that whatever fishing is allowed on the Reef would become sustainable.

This article just scratches the surface of the science behind no-take marine reserves. If anyone's interested in reading further, check out this excellent and highly readable document from PISCO. In the meantime, my wife and I will be sailing off the Whitsundays later this year, when I look forward to personally seeing the coral trout in all its protected glory.